You know me and my preoccupation with Great Lakes freighters. Especially now that I have spent hours over the last few weeks sketching the Maumee.

I have been missing the Maumee since it shipped out. But this evening, my ship came in! My new ship, that is.

But tonight I saw the ship as I have never seen it before!

I went down to the Outer Harbor to get in my 10,000 steps. At about my 6500th step, I hear this big loud horn. It was a foghorn! I did not realize that at the time. I just knew it was a kind of horn I had not heard before and it must belong to a big, big ship.

One woman called her son to ask if he knew about a freighter coming in. I appreciated that her son would know about this kind of thing. But he did not seem to know.

I said, "Well, something is out there. There is a big ship ready to come in."

Sure enough, after a few minutes there it was. This big, graceful shape on the horizon, beyond the breakwall.

Someone told me it was the American Mariner. That is the biggest ship to come in to Buffalo. I know that because of my story.

Long story short, a whole bunch of us, most of us strangers, wound up gathered on a hill by the lighthouse, watching the American Mariner come in. Here is an amateurish picture I took. I think the phone put on the flash. The pictures my new friends were taking were a lot better, I am sure. 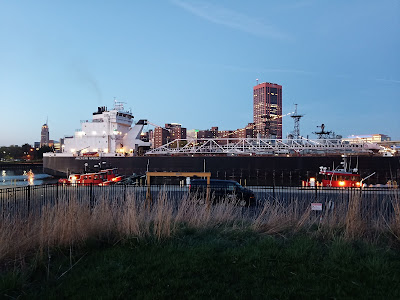 It was so much fun! It was like being in heaven. These people were my people! They knew all about the Maumee which I had been drawing. They recommended websites and Facebook groups that could hip you to this kind of thing. They were as much in awe as I was as we stood on this hilltop and watched the huge ship glide into the Buffalo River. Night was falling and lights were blinking on.

One gentleman marveled that he thought that the American Mariner was flying the Buffalo Sabres flag and the Buffalo Bills flag.

That was when I contributed my one bit of knowledge, going back to my story.

I said: "The captain is from Buffalo!"

And a shout went up as my new friends delighted in that new factoid. I was so proud to have contributed something because they knew so much.

What a wonderful evening -- darkness falling, the city skyline twinkling, the loud hum of this gigantic ship passing by, on its way to the Cheerios plant. Right now it is docked right where the Maumee was.

I am going to go visit it.