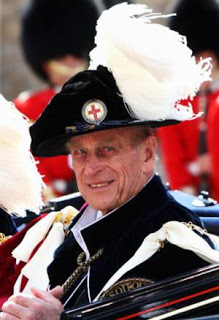 I am saddened to hear of the death of Prince Philip. Howard told me this morning. He yelled down the stairs about something while I was making breakfast and when he does that you know it is something important.

That is too bad. I will miss Prince Philip greatly.

Prince Philip of Schleswig-Holstein-Sonderburg-Gluckberg. I love it how Prince Philip is being referred to simply as a Greek prince, you know? Yeah right.

Looking around the Internet, a bad thing to do under any circumstances, I am depressed by the people wishing him ill in the hereafter. I know little about the private life of Prince Philip but nobody else knows anything either. I have said a prayer for him and I wish him the best.

Can I have a mass said for Prince Philip?

Anyway beset by nostalgia I found myself looking back on his prominence on this site.

The list of gaffes -- i.e., glaringly politically incorrect things -- that he said.

The times when my mother would be concerned for his health and I would fib confidently: "Oh, Mom, I read that Prince Philip is better." Sure enough he was better! That was what, five or 10 years ago?

The story my friend Stephanie sent me about the island where Prince Philip is a god.

When Prince Philip and Queen Elizabeth gave Pope Francis a bottle of whiskey. What a perfect gift. So British. Anyone else would be tied up in knots, thinking, what do I give the pope? A rosary? A statue? No. This was perfect.

There was even the time I noted seeing a portrait of him in Toronto at the Royal York.

So much history we share! How could I have ever become so involved with Prince Philip without ever meeting him?

The poor queen. I feel bad for Queen Elizabeth with him gone.

Prince Philip was one in a million!

Love this! I have watched The Crown so of course I know all about Prince Philip. If he is as nice, reliable, classy and handsome as the actors who played him, I do.

And I agree about reading the internet being depressing. The venom, the ignorance, the misspellings! You have the right idea Mary, going out in the world with your pad instead!

Love this! I have watched The Crown so of course I know all about Prince Philip. If he is as nice, reliable, classy and handsome as the actors who played him, I do.

Sensibly Shod Commoner... Libby .... you are so sweet to comment and I am so sorry I fell off the Web log wagon and missed it! I have never watched "the Crown" and you make me want to. My brother George and I have an informal little royalty discussion email group and I am going to add you. So far it is just three of us and you will be No. 4.
Prince Philip forever! BTW he was more handsome than any of the actors I have seen play him LOL