I am back to baking. Today I made Rhubarb Cornmeal Cake out of Nigella Lawson's "How To Be a Domestic Goddess." I had some rhubarb Lizzie had given me and I had stuck in the freezer. I thought I had used all the rhubarb but no. And so ...

It called for a pound of rhubarb which, I do not think I had that much. But so what. A cake is a cake, the rhubarb is sprinkled in it.

Today was a scrambled day where I worked too much on other things and could not keep tabs on my baking. I got bread dough mixed up in the morning and then put it in a pan and forgot to bake it. Yikes! It was ballooned all over the place. I might have to make pizza with it.

I made a second loaf of bread in the bread machine and left it up to the machine to bake it. Normally I take it out and bake it in a loaf pan but today I cannot be trusted.

The Rhubarb Cornmeal Cake, too, screwed up at every turn. I mixed everything up in separate bowls the way Nigella instructed. Eggs and vanilla (OK, I used rum) in one bowl. Flour etc. in another. Rhubarb and sugar in another. Then another bowl with the sugar and butter.

Things like this though tend to turn out OK, in my very extensive experience. As the cake baked in its springform pan, this incredible aroma filled the kitchen. I mean it was insane. How could this smell so good?

It got a little too brown owing to that I do believe I used a 10-inch springform pan, not a 9-inch. I have a 9-inch springform but for some reason I am incapable of using it, I go for the 10-inch. I think that's what happened. Who knows. But anyway, a browned cake is OK. It is golden brown. 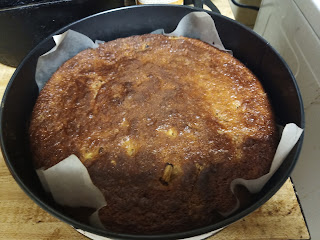 The cake is downstairs cooling now. It still smells amazing.

This one person has the recipe here. A number of blogs have spilled the beans on this recipe but I like this one I just linked to because she does not use too many pictures. I hate it when you go looking for a recipe and all you can find is pictures, pictures, pictures. People take too many pictures and they do not want to let even one go to waste.

Oh well, I should not judge them harshly.

Not everyone can be a domestic goddess like me!