Our ship comes in 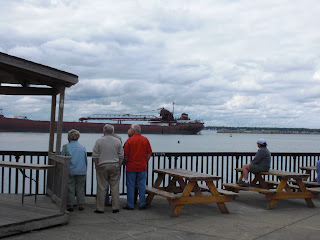 Today at my desk at work, sudden excitement!

I jumped up. I alerted Susan Martin, the Home and Style editor, at the next desk. Just as I did in 2009, the first time I saw the Herbert C. Jackson.

Today I did not bother taking any pictures because No. 1, the Facebook camera app on my phone is kaput, and No. 2, I have taken pictures before and these would not be appreciatively different.

Above is a picture I took in '09 of the Herbert C. Jackson. Here is another of it heading out to sea. 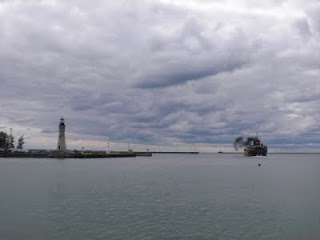 I told Howard the Herbert C. Jackson emitted black smoke which makes us wonder if it burns coal. If it does, we love it. Well, we love it anyway.

I got to do a story on the business page last year, I think it was, on freighters on the Great Lakes. The story ended up, to be honest, being a big nightmare for me. I am not used to writing about ore and trade and all that stuff and at the end, panicked, I ended up getting this guy from Buffalo Crushed Stone out of a meeting. Buffalo Crushed Stone owns our port.

"What's the matter?" I remember the guy from Buffalo Crushed Stone asked me when I got him out of that meeting.

"You have to help me!" I always laugh remembering saying that. But at the time it was not funny! I had to go over this paragraph all about ore and grain and Thunder Bay and pellets, and what went from what city to what other city. I was so mixed up!

But it all ended OK. I love the glamour behind the ships. Captain Dan, who sometimes pilots the American Mariner, the biggest freighter ever to make its way up the Buffalo River, he told me that in olden days the crew would dress for dinner and gather to dine in rooms with beautiful woodwork.

Now the crew just kind of hang out and wear baseball caps and play with their iPhones. Oh well.

The Herbert C. Jackson is becoming like an old friend. It was built in 1959, the year that Pennario's "Concertos Under the Stars" was one of the nation's best-selling albums.

It was a time of glamour and good taste!
Posted by Mary Kunz Goldman on April 16, 2012