You bet your ass 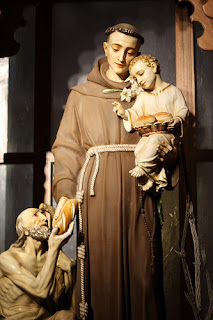 I am always losing things and he is always finding them for me!

We could not quite get our act together for the singing so we had a Low Mass and not a High Mass. But it was beautiful and quiet and reverent and surely St. Anthony was there among us. I can say that for sure because he as long as he was there when I lost my checkbook, and the sapphire from my engagement ring, and all my missing tax papers, I am sure he was there for this Mass.

There is a story about St. Anthony that I heard yesterday on Catholic Radio. I had never heard this story before. I have told the story about the fishes, here told eloquently by Gustav Mahler and Dietrich Fischer-Dieskau ...

This one man was a merchant and while I get the idea he was a good man, he did not believe the truths of what St. Anthony was telling him. So St. Anthony made a deal with him.

The merchant had a donkey and St. Anthony told him to make the donkey go without food for three days, so the donkey would be absolutely starving. At that point, the man was supposed to bring the donkey back to St. Anthony, who would be ready with the Blessed Sacrament.

The merchant said, "OK, sure."

The hungry, hungry donkey was brought back and, instead of eating the hay, went over to the Blessed Sacrament and dropped to its donkey knees.

In Ellicott City, Md., there is a statue of the event. Isn't this beautiful? I want to go to Maryland and see it. 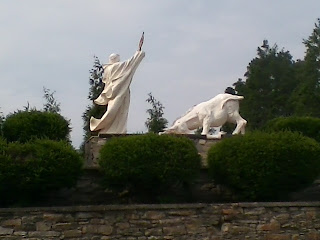 And here is a stained glass rendition. 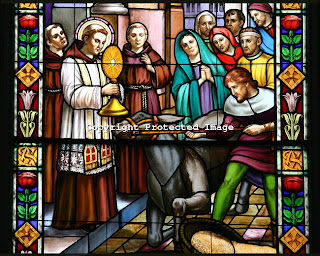 I have already given away all the surprises but you may read about it here.

My missal has the best description of St. Anthony. It says that he was always able to convert nonbelievers "through the supernatural forces which seemed to be always at his command."

Because Leonard Pennario was baptized at St. Anthony's I sometimes think that is where he got his supernatural powers at the piano.

And so we honor St. Anthony today.

St. Anthony, pray for us!