It is the eleventh hour. It is under the wire. It is in the nick of time. As of today Howard and I finally have our taxes in the mail.

We are talking weeks of work on Howard's part, weeks of anxiety on mine, one trip to my employer's payroll office for a missing document, many many conferences with Howard's accountants, an extension, lots of panic, plus the intercession of St. Anthony.

St. Anthony was called in because we were missing all my documents from 2007.

Howard was desperate enough so that even though he is not Catholic he told me to ask St. Anthony about these documents. That was back when St. Anthony was at our house, a few weeks ago. So I did. I said, "St. Anthony, this is not life and death. I could call the banks and whoever and get these papers replaced. But it would be a pain and time is running out. That is why I am asking. Then again as I said it is not life and death."

A confession here: I was just being nice by saying it was not life and death. I was pretty sure St. Anthony would find these papers.

Usually, though, he comes through for me right away. So a few days later, I will be honest, I felt a little puzzled that these papers had not turned up. Well, I thought, St. Anthony must have his reasons. And I had said it was not life and death.

Howard had the heat on me nonstop to get hold of these papers so I went to The News' payroll office, figuring I could at least start there. Which, as it turned out, was a smart thing to do. It turned out they had never given me my statement from 2007! Because, I realized, I had not been here in the office at the time the document came out. I had been in California with Leonard Pennario.

They gave me the document and I gave it to Howard. I meant to call the banks then, but I got distracted with work and my mom and stuff, and I thought it was too late anyway -- well, I do not know what I thought.

Anyway you would not believe what happened.

Howard comes home and he says, "I've taken the papers to the accountant and he says he has everything he needs."

Then he told me what had happened. He said he was going through this pile of papers ... 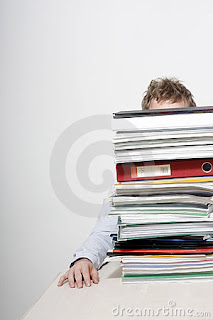 He thought, that's funny. Because there had been no statements from 2007 in there.

Then he found another 2007 statement.

They had all materialized in that pile! Howard could not get over it.

He said, "I had gone through that pile hundreds of times."

He said, "It was very mysterious."

Because that is the way St. Anthony works sometimes, he puts things in places where you already looked. My mom pointed out that phenomenon and she and I laugh about that.

I told Howard I had thought it was funny that St. Anthony had not come through for me right away because usually he does. But Howard said, "Well, today was the first day I was in the office."

Also please note how the document I went and found myself, my work income statement, was the one document that had not been given to me in the first place.

Anyway, thank you, St. Anthony! This is a spectacular St. Anthony find to add to my already impressive collection.

It sure sweetens the pill of having to pay our taxes!
Posted by Mary Kunz Goldman on April 15, 2011