Of tourists and toilets 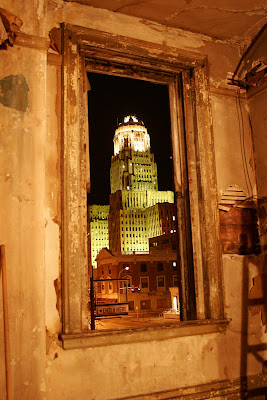 View of City Hall from Big Blue.
(Click photo for larger view.)
It is not every day that you wind up on a death march in City Hall, having to go to the bathroom, all because of Frank Lloyd Wright.

Buffalo is not a normal city. We have a wealth of houses wrought by Wright. (Alliteration station!) And a couple of them are in my neighborhood. One of them is the Tillinghast House ... I forget its formal name, but that is what everyone calls it. The owner of the Tillinghast House wants to turn it into a high-end bed-and-breakfast. The neighbors are protesting.

City Hall scheduled a hearing, which is what brought Howard and me to City Hall. We wanted to speak up in favor of the FLW house's owner. We have a lot of reasons, not the least of which is we can't wait to shell out the $300, or whatever a night's stay at the Tillinghast house is going to cost, and stay over there ourselves. With Ron Moss. We are sure Moss would enjoy a night at the Tillinghast house. That will show the fussy neighbors.

And if anyone so much as looks at us sideways we will invite Larry Solomon over to vacuum.

I'm sorry. But when you buy a house in a historic, tourist neighborhood, it should be with the understanding that your life will not always be normal the way it would be if you lived, say, in West Seneca. People are going to want to come in and look around. There will be the occasional stranger on the street. That's why it kills me when neighbors worry that the Darwin Martin House, another Wright creation, will attract traffic. Of course it will. And we will have to put up with it. That's the price we pay for living in one of the city's showcase neighborhoods. Get with it, as Jocko likes to say.

That would have made a nice speech to make at the hearing. But the hearing was canceled. So Howard took the opportunity to drag me all over City Hall, from office to office, as he took care of matters regarding Big Blue. Which, I might add, was visible from one official's corner office in the Office of Strategic Planning. He wanted to know what building we were talking about so we just pointed at it. Big Blue looks so funny and anachronistic, this old brick house sitting among all these skyscrapers. We keep thinking we should nickname it Old and In the Way, after Jerry Garcia's old band.

City Hall is fun, with its old radiators, hand-lettered signs, ancient books, and cheery people sitting around with not a lot to do. My favorite was the Department of Permits and Inspections. They have a big sign: "Do You Need A Permit?" You can skip all the fine-print documents hanging beneath it. The answer is always "yes." 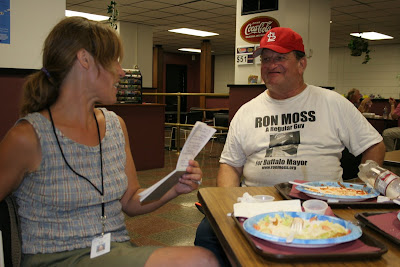 MKG and Ron Moss at City Hall. (File photo)
But we were going from office to office for well over an hour. And as I said, I had to go to the bathroom. Which in City Hall is not as easy as it sounds. My despair peaked when I found one bathroom, and it was locked. Finally, as we were meeting with the ninth or 10th official we talked to, Howard got him to find me the key. "The wife needs to use the ladies' room," he said.

Going to the bathroom in Frank Lloyd Wright houses can be problematic too. In Fallingwater, I think it was -- that is the Wright house in Pennsylvania, outside of Pittsburgh --Wright had fitted the bathroom out with the oddest toilets. They were very low, as if they were designed for toddlers, but with adult-sized seats. I remember asking the tour guide why they were like that, but she didn't know.

I wonder what the Tillinghast House bathrooms are like.