With taxes out of the way, today is the day I get organized and introduce a few people who will figure in my blog. They do that in "The Forsyte Saga," a book that I love. The very first chapter, the book throws it at you who's who, and you can keep referring back to that if you get confused.

Here are a few people in my life:

1.) Howard's cousin, Ron Moss. (Shown above, with author.) Back when Moss's wife used to let him out of the house you would see him pushing a shopping cart down the middle of Elmwood Avenue, yelling at cars. Now she lets him out, but not as much as she used to. In a movie, we could imagine Moss, a former career cab driver, being portrayed, inadequately, by John Belushi.

3.) Byron Brown, mayor of Buffalo. We have a dapper mayor who always dresses nice and looks good, and sometimes we run into him in coffee shops, at which time I like to drop his name.

4.) My brother Tony. Up till now I have mentioned only my brother George. George is my little brother. Tony is my older brother. He pops up in my life at inconvenient times.

5.) Jackie Jocko, lounge pianist. Pictured above. He plays at the Hyatt downtown Tuesdays through Saturdays. Jocko fascinates us with tales of "the era of the great lounges," during which he knew people like Marlene Dietrich and Richard Nixon.

6.) Erna Eaton. Pictured above. Recently retired as society editor of The Buffalo News, Mrs. Eaton is the ultimate arbiter of what is correct and what is not. We hang out with her at Jackie Jocko. 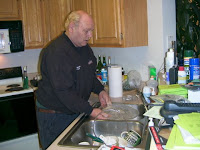 7.) Larry Solomon. Pictured above. I already mentioned him in connection with the wallpaper he stripped off the bathroom walls without telling me. Larry lives in the suburbs and every time he comes to visit our city home, which he does with trepidation, he never leaves without making sure that I am securely locked in. 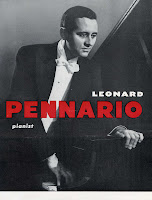 8.) Leonard Pennario. The pianist I am writing the book about. We have known each other just about six months now.

9.) My husband, Howard. Pictured above. We have been married three years. A year ago last Christmas, he bought a building we call Big Blue, a Civil War-era pile of bricks right off Niagara Square. The place used to be the Round Table Restaurant, a famous steakhouse owned by George Steinbrenner, and was more recently a series of gay bars. Howard just finished taking back all the beer bottles that were in the basement. 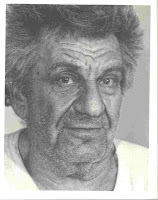 10.) Howard's and my respective dead uncles, Uncle Jake and Uncle Bob. They died before we met each other, but we discuss them and their pre-P.C. pronouncements as much now as we did when they were alive. Surely they have met in heaven and are standing next to each other, looking down and criticizing the world. Uncle Jake is pictured above:

Email ThisBlogThis!Share to TwitterShare to FacebookShare to Pinterest
Labels: -Cast Of Blog Characters

Welcome Mary! I love it so far. Keep up the good work!

I am just clicking on this cast of characters now and find myself thinking "what a swell idea." I might have to borrow it...with credit of course. :)