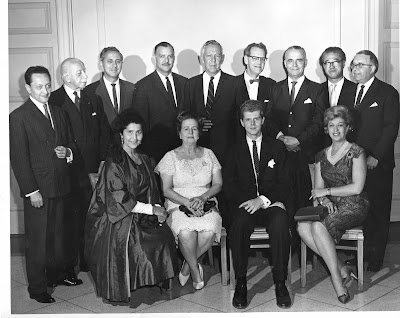 Larry Solomon called up and he wants to come over again and help me clean the house. I am thinking that when I get back from California I will hire him to do that. "After California" has become a kind of mantra with me. Until then, I am just letting the world pile up around me. I have resigned myself to living in squalor. When I get back, I could probably use Larry's intervention.

Once he broke the kitchen garbage can. The pedal that opens the can is funny now. It still works, but it's not right.

Another time he did something to the highboy in the bedroom. That is a great word, "highboy," meaning a tall dresser. The highboy used to stand still and now it rocks forward whenever you open a drawer. Well, my clothes are jammed into the drawers so tightly you don't want to open them anyway.

The most famous Larry story involves his stripping the wallpaper off the upstairs bathroom walls without telling me he was going to do that.

Another thing he will do if you don't stop him is vacuum for hours. He goes into a Zen zone. His eyes roll back in his head. Larry is like a robot that gets stuck on vacuuming until he is manually rebooted. If you do not come along and reboot him, he will vacuum and vacuum and vacuum for three days, the same 10-foot-by-10-foot square of carpet. Howard says that going full steam, with an Indian-reservation cigarette in his mouth, Larry looks like one of those locomotives that stay in the freight yard, whose job it is to push other trains around on the tracks. I agree.

Perhaps the smoking and the rabid vacuuming are a result of Larry's being inside the Buffalo city limits. He is from Amherst. He gets nervous.

One of Larry's most alarming tendencies is to polish the piano. For hours. Which is ridiculous. The piano is one of the few things in my house -- perhaps the only thing -- that does not stress me out. It is a 1905 Steinway parlor grand and it still has its old finish, so there's not a lot that can happen to it. As long as you don't spill something inside of it, no biggie. A few things sit on top of the piano: music books (Chopin, Schumann, Broadway hits, etc.), a candy dish for when Howard practices (with my braces, candy is a thing of the past for me). There is also a framed photo of the jury of the first Van Cliburn International Piano Competition. Leonard Pennario, who I am writing the book about, is the smiling, good-looking juror, back row, third from the left. I only write biographies about good-looking men.

You will probably recognize Van Cliburn, in the front row with the ladies.

But I was talking about Larry. Last time he was at my house. I come home and there he is, sighing, lighting a cigarette after his long day's work. It is traditional for us then to have a glass of wine. As I am pouring it, Larry says, "Go look at your piano. You'll be very happy. I was at work five hours on that piano."

And what he has done is polished the whole thing. Even the keys! Which means I can't play it without my fingers sliding around. Someone once did that to the piano at Carnegie Hall and they had to spray hair spray on the keys to make them not-slippery again. That is a famous story but I can't think right now who the pianist was.

Uh, Lar, I could have thought of better uses for your time. What about the kitchen floor? Or the dreaded upstairs bathroom? Did you forget your Haz-Mat suit again?

On the bright side Larry gives me advice on my life, says that I am the best thing that ever happened to Howard, and helped me find my kunzite ring that I lost. That is my favorite gem, kunzite.

Also here is a Larry quote I love. I was downstairs and he was upstairs and we were shouting back and forth discussing his romantic situation. And Larry yelled down to me, "I have to get out more. It's not as if Mr. Right is going to come right to my door."

I guess I miss Larry. Maybe I will have him back here again.

After California, of course.