The Bosch gets the kabosh

We put the kabosh on the Bosch, b'gosh.

The Bosch stove this is! Not the dishwasher. The Bosch dischwascher -- sorry, you just have to spell it that way, you know? -- is the light of my life. I treat it like gold and buy it expensive rinse aid because it is the one appliance that has not betrayed me.

How did Bosch make such a great dischwascher but blow it with the stove?

Anyway. The saga of the Bosch has been chronicled extensively on this Weblog. It kicked two years after I first bought it, and then, well, it just kept kicking.

Finally I kicked it!

The other day it began leaking gas and that was the last straw. Up until then Howard had been fixing it whenever it broke, which was often. We kept ordering parts. But a gas leak is no joke and so as of today the Bosch was out the door. While I was waiting for the new stove I gave the Bosch the ceremonial kick.

Not long after that the phone rang and it was my Aunt Marce. I told her about the Bosch and how it was finally outta here.

She said, "Well, I hope you gave it a ceremonial burial."

Aunt Marce is a wonderful cook and that conversation was a pleasure because I knew that she understood me on a visceral level.

The thing was, that Bosch, it would desert me without a moment's notice. I do my church coffee hour and I could not go on like this, the thing dying on  Friday or a Saturday right when I was prepping for it. It had gotten to the point where it kicked several times a year. What if it kicked on Thanksgiving? Fie on it! Fie!!

So the Bosch got the kabosh.

Because of bad experiences I had had with Orville's over this Bosch, I went with Lowe's this time. Burned by this luxury stove that did me dirt, I am now going with a bare-bones model. It is a no-frilled General Electric with not so much as a clock. Something like this ... 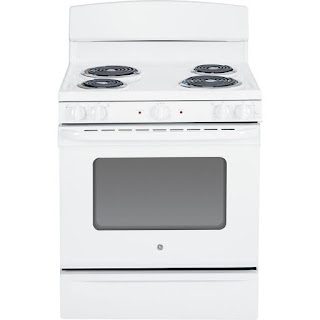 When I realized that what I thought was the warming drawer was actually the broiler, I could not stop smiling. It is like memory lane! In my college apartments, we had these ancient Laurel and Hardy appliances, and the stove always had the broiler in this bottom drawer. I had forgotten all about that.

Well, you must excuse me now, but I have an Italian pork loin braising slowly on the front burner of my new stove.

Our experience has been with washing machines - we had gone through several with all the electronic bells and whistles - we finally purchased a Speed Queen Commercial Heavy Duty with just the plain dials and no electronic controls - we have had no issues after several years of normal to heavy use. On a side note we have always had good luck with Orvilles. I would be interested to hear about your experience with Lowes.