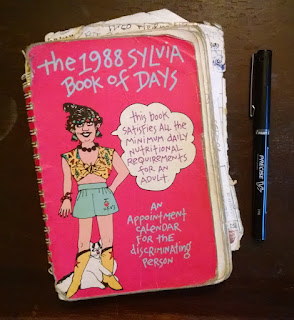 I have been tidying the house because it is this nightmare. And today this old datebook washed up on the tides. It is "The 1988 Sylvia Book of Days."

Sylvia was this cartoon to which my roommates and I had a deep devotion back in the day. Awfully feminist, awfully funny. The cartoonist who wrote the comic strip, Nicole Hollander, is 80 now, how about that? I just had to look it up.

I should write an, ahem, essay about this and get it published somewhere, but I am too lazy and I have other things to write and do. Speaking of which, the things I wrote and did while I was using this datebook, just looking at the notes I made of them takes me back to this crazy era of my life.

What was I, 25? I turned 26 during the course of this book. I do remember though that I carried the book around with me long after that, because I had a lot of notes and phone numbers in it. The list of phone numbers made me kind of teary. My Uncle Bob was on it. I miss my Uncle Bob. Robert Junior Lockwood was on the list too, God rest his soul. He was a bluesman my friends and I were friends with. We went to Cleveland and stayed at his house.

The notes show me freelancing for the Niagara Gazette. I recognized my questions for John Lennon's sister, who was one of the people I interviewed. Some of the interviews I totally forgot. On Monday, Oct. 24, I had a note to interview Maria Irene Fornes at the Lenox Hotel. Who was Maria Irene Fornes? I had no recollection so I Googled it and she is a lesbian Cuban playwright.

How boho is that, interviewing this Cuban playwright at the Lenox Hotel? Surely we spoke of many things. I kind of remember going to the Lenox Hotel for something, you know? But beyond that, it is a mystery.

The Niagara Gazette hired me near the end of that tattered year. My tryout was Oct. 7. The "yuch" I wrote did not mean I did not want the job. I did. But the tryout stressed me out. I was much more happy to write that on Oct. 9, my bartender friend Lupe was singing at the Feede Bagge. 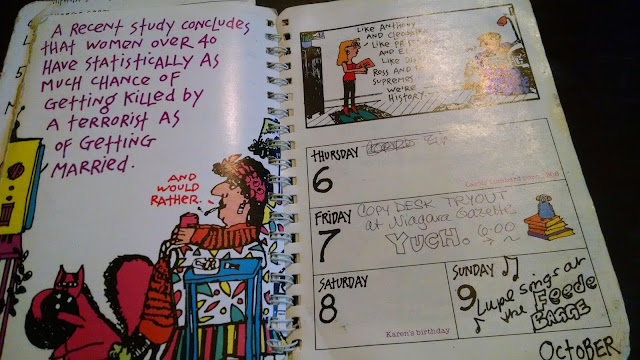 The honeymoon with the Niagara Gazette did not last long because I had these plans to go over New Year's to San Francisco with my brother George to hear the Grateful Dead. I stuck to those plans -- I made the job let me go, I remember -- and it totally shot my work ethic. The old Sylvia datebook  includes a million notes for the trip. I went back and jotted them on unused pages earlier in the book. 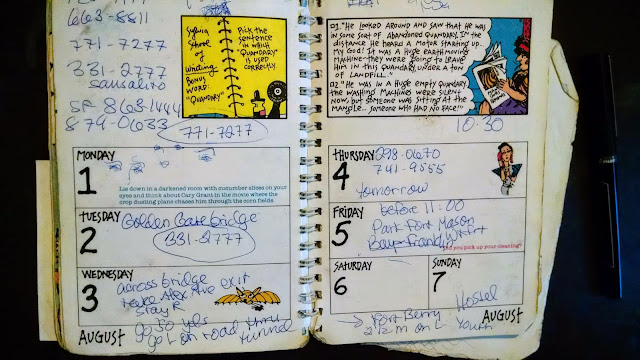 There were money notes about splitting the expenses with George, directions involving Sausalito and the Golden Gate Bridge and my Auntie Rose, who lived in Santa Rosa. My dear Auntie Rose. She is gone too. She was very anti-job and it was while we were touring the Sonoma wine country that my work ethic officially vanished. I stuck it out for something like two years at the Gazette but things were never the same. They stopped letting me write, was another problem. They wanted me to write headlines but not stories and I became discontented with that.

Back to Sylvia. There were pictures stuck between the pages of hippies George and I met in San Francisco. There was a postcard of the Three Stooges that made me laugh out loud because I knew it was from my friend Daryle and sure enough it was. 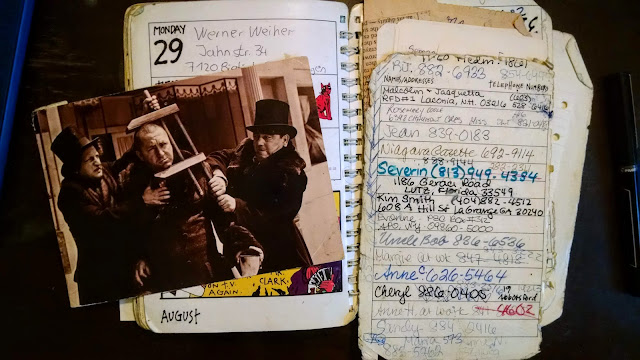 There was also a photo of Jackie Kennedy Onassis and Nelson Mandela. And a photo of me with George and our sister Margie who, I have to say, looks exactly the same now. Phone numbers of guitarists. Lists of my favorite blues songs.

Really, as Dickens famously wrote, it was the best of times, it was the worst of times. It would be over 10 years before I met my husband. I was not even yet in my West Delavan apartment. I think I was still living in the haunted Parkside place. What a zoo.

Moral of the story: Do not toss your old datebooks!

They are time machines!