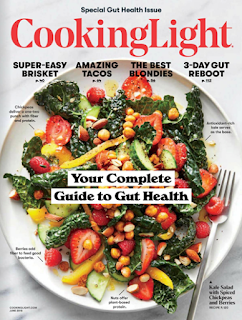 The magazine Cooking Light is folding and I seem to be the last person in the world to know. This despite my longtime subscription which I have reported on at great length over the time I have been keeping this, ahem, chronicle.

I suspected many times that Cooking Light was circling the drain.

There was the Thanksgiving of the "cooked plants."

And my suspicion that the magazine was trying to get me addicted to breadsticks.

I get the idea they repeat and recycle a lot of recipes. Just now I opened the Farewell Issue at random and it opened to "Shrimp and Grits." I know I have seen versions of that before.

The magazine irritated me to the last. There is that word "gut" unattractively used literally, as in the illustration above.

Gut ist nicht gut! When that word first surfaced maybe five years ago I knew right away it was here to stay, and sure enough.

Yet as I have written before, the price kept dropping, and I kept capitulating, and I do look forward to the monthly thump of the magazine in the mailbox.

I like pretending I am organized and crossing off the recipes as I make them.

I like the food photography. I liked this one editor, Ann Taylor Pittman. And the magazine's most recent makeover -- the last of dozens -- looked good.

I'll have to find another!