The Feast of All Hallows 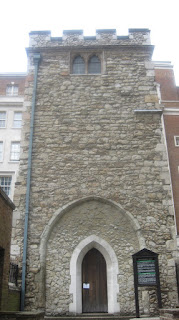 Today after church we celebrated the Feast of All Hallows. The kids all dressed up as the saints of their choice. And they paraded in, and took the stage one by one, as the adults sat around enjoying the show with our coffee and donuts, not to mention quiche and soup and bagels.

We have done this for five years now. Every year it gets a little bit letter. This year a sound system played "When the Saints Go Marching In" as the kids paraded in. It also played during the Musical Chairs game that followed. There was also a Halo Toss.

My nephew Georgie participated. He was St. Matthew. I was proud of him. He got up there in his robes and proclaimed that St. Matthew, being a tax collector, was the patron saint of tax collectors and accountants.

The littlest saint was St. Maurice. He led the pack, carried by his mother because he was so small. He sported an amazing Roman helmet and armor. I had never heard of St. Maurice before but he was a Roman commander who was martyred.

St. George and St. Michael were very popular because boys got to put on armor to portray them. A couple of chubby little girls dressed as nuns. St. Therese was popular. Surprise choices included St. Apollonia, the patron saint of dentists and teeth, and St. Dymphna, patron saint of insomniacs and the mentally ill. Alas, wee St. Dymphna arrived too late to the party because her family had some commitment in Niagara Falls that had tied them up.

It was a hallowed morning, I will say that! And afternoon. Our coffee hours often go into the afternoon and this party drew a big crowd and no one was in a hurry to leave.

There is an All Hallows High School, how cool is that?

I hope they name their basketball team the Deathly Hallows. How can they resist?

And in London there is the medieval All Hallows church, pictured above.

What a look! Apparently it is surrounded by modern office buildings. Imagine, you are looking for the office where you are to begin your temp job, or see your accountant (with appropriate prayers directed toward St. Matthew, of course) .... and then this.

This church where you have to believe King Arthur attended Mass!

But anyway. Back to our All Hallows celebration. I floated the idea, and it quickly gained a large following, that next year we should take an adjacent Sunday and do Grown-Up Saint Day. That is when all the grown-ups will dress as saints and say in a couple of sentences who this saint was. Plus from experience we can talk about how this saint has come through for us.

What saint will that be for me?

I had better start planning now!

Email ThisBlogThis!Share to TwitterShare to FacebookShare to Pinterest
Labels: All Hallows, Halloween