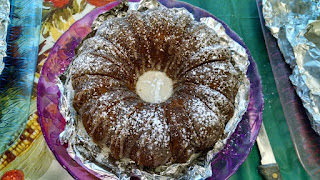 A few days ago I had occasion to go through a bunch of photos. I mean, I scanned several years' worth of photos I had taken with my phone. Long story what I was looking for, but the upshot of it was, it hit me ...

Almost all my photos fall into one of just several categories.

The cat. (Speaking of categories.) 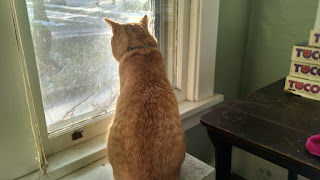 Views of Buffalo -- Delaware Park, downtown, and other locations. It is a funny thing now. Something strikes you as pretty or dramatic, and you have to snap a pic. 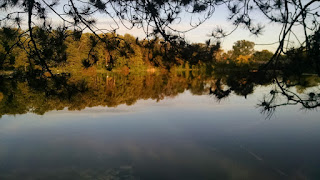 Wow, how the months pass! That was not that long ago.

The third category is things I am baking or have baked for church coffee hour. I did not realize I have taken so many hundreds of pictures of cakes and pastries and whatnot. You cannot have too many, that is for sure!

With which, above is the Whiskey Squash Cake I made for today's gathering. My friend Joe at church is a master gardener and he grew these mega-squashes, five or six of which I inherited. I have a way of inheriting Joe's stuff. In that picture of Jeoffry up above, of Jeoffry looking out the window, those are Joe's TUCO puzzles. Well, they came from him. They are mine now.

But back to the squash. They looked like Delicata Squash only much, much bigger. I could find no hint of how to cook them so I roasted one of them at 350 degrees while other things went in and out of the oven.

It may have stayed in the oven a bit too long, however, not a bad thing. The squash's skin was so crisp and roasted that it just fell away.

You know what I hate? The word doneness. So I will not use it here. I will just say that the squash was well done. And in the cake it married nicely with Early Times whiskey.

Ha, ha! I always laugh thinking of that. My brother George and I were once on one of our road trips going God knows where, and we went through Kentucky, and we kept seeing that the official whiskey of the Kentucky Derby that year was Early Times. We would always laugh at the billboards because all we could think was Early Times meant that you drank it at 6 in the morning.

Baking the whiskey into a cake lets you enjoy it politely at, well, early times. This cake was gone before I could taste it.

I'll have to roast another mega-Delicata!

And uncork, again, that bottle of Early Times.