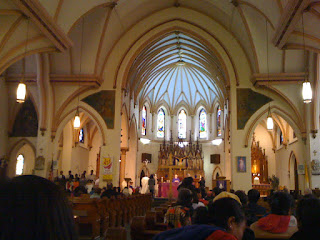 Yesterday I went with lounge sensation Guy Boleri to Mass at Annunciation Church. That is where Guy was baptized and so he wanted to go there.

That is the church pictured above! It is funny, I played the organ there when I lived in that neighborhood. I do not think I have been back there since. I had forgotten how beautiful that church is.

They like to switch the names of churches around for confusion's sake and Annunciation is now known as Our Lady of Hope. It is almost completely immigrant. Guy and I were mostly guessing but we reckon there were Burmese, Cambodian maybe, Vietnamese, African, we are not sure what else. They are from the neighborhood. If you get there early you see them all walking to the church from all directions, sitting on the steps, talking, getting ready for Mass. It was really sweet to see.

OLH is run by the Missionary Oblates of Mary Immaculate, the order Leonard Pennario liked. There were tons of little kids from every imaginable race. Haha.. my little niece Barbara heard me telling my brother George about that. "I want to go there!" she said.

I can understand why.

This Mass was an adventure!

It was comfortably crowded and had all these exotic touches. They had an African Choir, mostly young men, who performed at the Offertory, with drums. And a Gesture Choir, all girls, who performed at Communion. Black and Asian girls mostly, looking like angels in their white robes.

I will be honest, this is not my style of Mass and I had hedged my bets by going to my usual Tridentine Mass at St. Anthony's earlier.

I do not like piano at church, or applause. T'ain't fitting.

Also the mass was too long. There is way too much wiggle room in modern masses and what happens is, people are always adding things. This Mass was weighed down with a long recorded message from the bishop with New Age piano behind it, about Catholic Charities. It went on for at least five minutes. There was also a prayer for Catholic Charities.  "Lord, we beseech You, grant us blah blah blah..." No one in the world wants to bother with this prayer, I am sorry. I do not even think God wants to bother with hearing it!

On the bright side, though, I liked how people's hearts were in this Mass. Also it gave you a real world view!

There was a Burmese Mass scheduled for that afternoon. There was a leaflet that translated prayers into what looked like Vietnamese. It was fun seeing these kids of every stripe. Guy is not shy and immediately became involved with them and their parents, entertaining, assisting. Too funny.

I do wish everyone worshiped according to the Tridentine Latin rite. It would be simpler and everyone would be happy and equal.

But it is fun to be able to go around the world in your own home town!