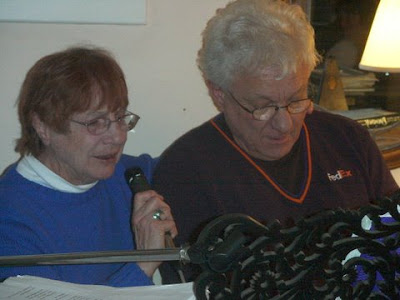 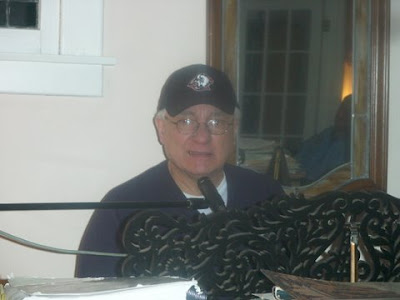 First we went to the Anchor Bar. I had a salad, can you believe that? I was cringing hoping no one would notice. The place was crammed with tables of people digging, family style, into huge platters of chicken wings. Luckily I can't even eat wings with my metalclad mouth. Anyway, Guy had a salad too. We are always talking about watching our weight. But as we were leaving he stuck his face right in this neighboring table's platter of wings. I mean, his nose was inches from it. "Wow, those wings look good," he said. Guy is not shy.

The concert was even more fun. As Ms. Montero was thundering her way through a Ginastera sonata, Guy said, in a loud stage whisper: "Jesus!"

As Ms. Montero was improvising on "Take Me Out To The Ball Game," Guy went, "Wow!" Again, really loud. And I'm sinking down in my pew. This was in Holy Trinity Lutheran Church.

Yes, like Liberace, Guy does not go anywhere to go unnoticed. The good news is, everyone who meets him loves him. By the end of the night Guy was old friends with two Lutheran women sitting in front of us. He was wearing his blue Winnie the Pooh T-shirt and you could tell they thought he was the cutest, cuddliest thing. Guy has to dress formally when he plays the Buffalo Club so when he is not working he likes to kick back.

Here is my favorite Guy story. My teacher, Stephen Manes, was playing a complete cycle of all the Beethoven sonatas. It was the first concert, and it was a big deal, so Slee Hall was jammed. And I forget which sonata Stephen was playing, because everything has been eclipsed by what Guy said after the slow movement.

REALLY loud, he remarked: "That would be great music to make love to."

He continued: "Of course, it would have to be a little bit longer. That was kind of a short slow movement."

By now all these tweedy people are turning around to look at us.

"Oh, come on," Guy said, addressing us all. "I'm sure everyone was thinking the same thing. Don't be so repressed and uptight." "Repressed" and "uptight" are words Guy loves. He is a yogi in addition to being a jazz pianist and he is always giving us advice.

When I went to my lesson a few days later I was still laughing about Guy and his brief sermon. I told Stephen about it. He loved it. I said, "You have no idea what goes on at your concerts."

Stephen said all he was aware of was somebody snoring.

It couldn't have been anybody near Guy.
Posted by Mary Kunz Goldman on May 08, 2008