Sale of the Century 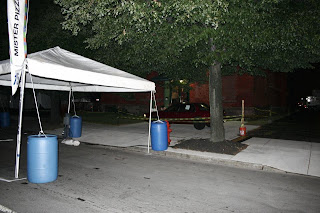 This year's Taste of Buffalo festival in downtown Buffalo is featuring my old Buick Century for sale.

Howard has it on display in front of Big Blue! And hundreds of thousands of people will see it because Taste of Buffalo is said to be the biggest food festival in North America.

Howard arranged it artfully with professional For Sale signs in its windows. A few friends aided and advised him including the former Jaguar dealer and also the automotive columnist for the Buffalo weekly Artvoice.

That is it pictured above, awaiting the festival. This is the car that was stolen from me and we found it on Lemon Street. But this car is no lemon! It is 165,000 miles young and, as Howard puts it on the sign, extremely reliable.


That is funny to remember when it was stolen. It was right before I met Leonard Pennario, maybe a month before that. That is how I date things. We found it because of the GPS tracker Howard had on it. It was stolen by some drug dealers apparently and when they realized it was bugged they thought it was a bait car and they abandoned it. Look at streetwise me, slinging around phrases like bait car.

I wrote about that theft here, remember, about how I had secretly cheered on the thieves. But since then Howard pretty much rebuilt the whole car. By then I had a new car of course.

Anyway, today my old Century could become, in our lives, history.

Email ThisBlogThis!Share to TwitterShare to FacebookShare to Pinterest
Labels: Cars