The dawn of a new Century 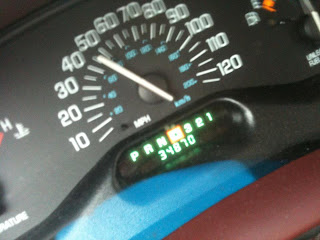 "Because I can." That is what he bragged on Facebook. He posted that picture up above of his prize. It has only 34,870 miles!

The 1994 Buick Century used to be mine. It was stolen, the summer right before I met Leonard Pennario, so that would have been in 2007. It was brazenly lifted from the parking lot at work and we found it, insultingly, on Lemon Street.

I secretly cheered on the thieves because I was sick of that car at that point anyway. I rented a little Hyundai Sonata and I remember thinking one morning how my life had improved, with this neat little rental car sitting in the back yard, and my actual car God knows where. And right then was when the police called with the news about the Lemon Street find.

You could definitely call that the steal of the Century. Hahahahahaaaaaa!

Howard is sweet and wanted the old Buick back as a matter of principle. It has been his car since then, lumbering along in these Buffalo snows.

The new Buick -- er, the 1998 Buick, is a smaller model. That was the year they changed the Buick Century. It does not look quite sporty but it is pretty in a Buick Century way.

I had to take Howard out to Lackawanna to pick it up. It was in a particularly rugged part of Lackawanna with vacant lots and projects and those stupid wind turbines. Can you believe those dumb wind turbines? A couple of them were not even turning. They were just sitting there.

And I was just sitting there, though not as peacefully, as Howard prepared to drive the new Buick away. Zut alors, I was afraid people were going to think I was a narc, sitting there in my police car. A few cars passed me and they always slowed down and I felt myself getting looked at. Prepare to be shot, you know?

But all ended well and last night Howard took me for a ride in his new Buick.

It is beautiful!
Posted by Mary Kunz Goldman on January 26, 2012

Email ThisBlogThis!Share to TwitterShare to FacebookShare to Pinterest
Labels: Cars