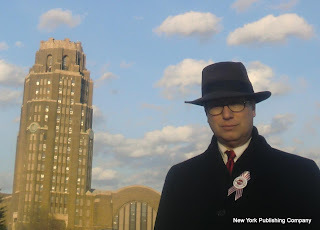 That is a picture I snapped of Howard at Dyngus Day. He is standing by our palatial Central Terminal. He is Prince Dyngus!

Howard was a judge for today's Dyngus Day Parade and he has this strategy that works every year, should he want to be able to drive through police barricades and get a prime parking spot. He dresses up with a red tie and everyone assumes he is a visiting Polish dignitary, say the mayor of Krakow. And he is waved through.

He was even thanked today for the parade!

"That was a really nice parade. Thank you," someone said to Howard when it was over.

"Why, you're welcome, son," Howard replied. Actually I do not know what he said but I hope he said that. 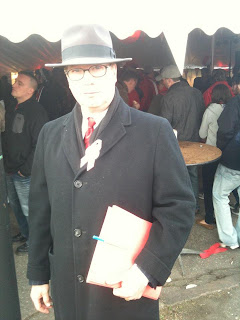 A street scene. Look at that sky! 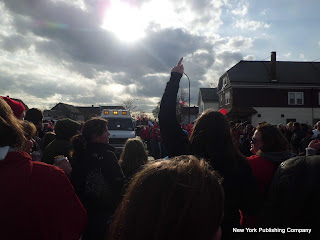 The parade was fun and as you can tell from the picture above, one thing that is great about the Dyngus Day Parade is the narrowness of the streets through which the parade winds. That emergency vehicle up above is part of the parade and you can see it barely fits between the lines of people. Fire trucks come rumbling through and they just about run over people's toes.

They need more music in this parade. Even Chopin and his piano went by with no sound. They should have consulted me! I would have lent them Pennario playing Chopin.

I drank a Tyskie or two but we did not make a big long night out of it.

Howard learned his lesson last time when I asked him to drop me after the parade at the Adam Mickiewicz Library. He will not make that mistake again! So today by the time the bells of St. Stanislaus were chiming 7 p.m. we were already on the way home.

Where here I sit. Dreaming of Tyskie and Krupnik.

And all that good stuff.
Posted by Mary Kunz Goldman on April 09, 2012