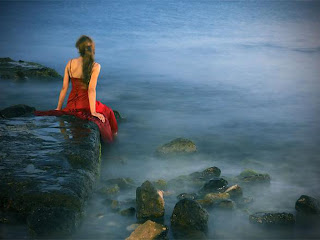 Today I walked down by the river. That is a nice thing I think about sometimes, how I work downtown and can walk down by the river, by a 200-year-old lighthouse, by an international border.

By huge gusts of wind that was blowing water everywhere!

At one point the wind was whipping the waves up onto the path where I was walking. It was like the Cave of the Winds! I moved to the side to get out of the way of the water and a man who was jogging had the same idea and ran up onto the embankment too.

As he passed me he said, "We're the only two people crazy enough to be out here!"

That was the truth! I could not stop laughing about that.

But it felt good to be walking out there in the wind and the rain (it started raining too, as if things weren't dramatic enough). I went over a chapter of my book in my head. You can get good at working in your head and that is what I am trying to do.

The waves did kind of remind me of Pennario's "Midnight on the Cliffs."
Posted by Mary Kunz Goldman on April 10, 2012

Email ThisBlogThis!Share to TwitterShare to FacebookShare to Pinterest
Labels: Weather