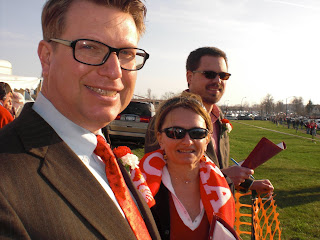 It is rare that I miss days on this Web log but I missed yesterday because it was Dyngus Day. What a day I had! What a night I had, too! I woke up today with no voice, is the best way to sum it up.

It all started with Howard and me judging the Dyngus Day Parade. That is a picture above of Howard above, at his post at the judges' station, which was in the beer tent in front of the Central Terminal. Howard is at left and at right are fellow judges, my friend Jane Kwiatkowski from work and Steve Cichon from WBEN-AM. 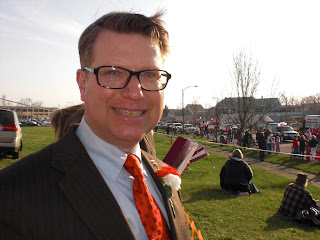 ... Howard looked like a Polish dignitary and when we drove to the parade in the Crown Vic, he was waved through the police barriers. We were driving down Paderewski Street and we hit the police barrier and Howard just tapped gently on the horn and motioned to the cop and he let us past. So we rolled on down Paderewski Street among all the marchers and floats and parked like royalty right next to Central Terminal. Ha, ha! I was laughing so hard I could not breathe.

The best team in the parade were the bowling pins. They marched along to the tune of a polka about bowling and then they would all fall down.

Howard was a conscientious judge and he took copious notes. 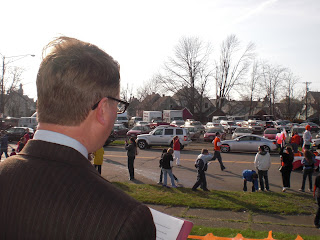 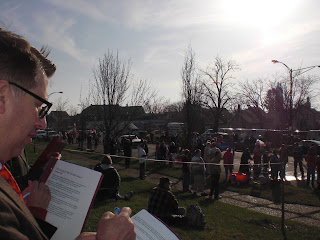 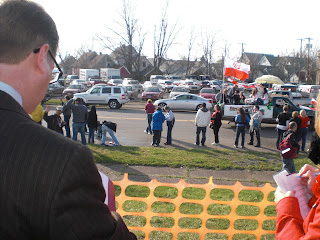 My friend Bing from church  ... 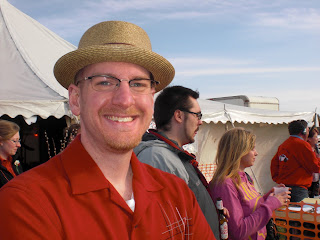 ... joined us at the judging station and he agreed with us that the bowling pins were the best. There was a group of people dressed as bowling pins and they would all fall down! They were great. Although a close runner-up was Frederic Chopin, dressed up in 18th century garb and pushing an organ.

Bing wrote about the experience on his Web log and included a great description of Howard in his brown suit.

After sitting in judgment we went to the Central Terminal and ate kielbasa and salt potatoes. And then Howard proved he was a prince among men because here is what he did. We were going home and driving down Fillmore and I said, "Drop me off at the Mickiewicz Library." And he did!!!

How many husbands would do that? It is Dyngus Day and you say, "Drop me off at the Mickiewicz Library" -- and he does??

That was the greatest!!

My friend Michelle was waiting for me at the Mickiewicz Library which was packed with people floor to ceiling, everyone drinking Tyskies and Zywiecs.

We took a break from the insane action to join our friend Melissa from work for a snack at the Polish Cafe across the street. 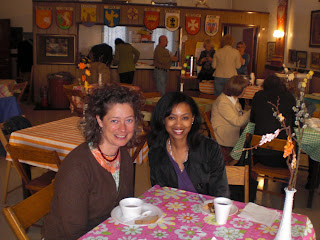 They had this one single Chopin waltz playing on a continuous loop which puzzled me. It is not as if Chopin had not written other waltzes! Next year I will fix it so they play the Leonard Pennario complete set. It is the greatest recording ever of the Chopin waltzes!

Then we went back to the Mickiewicz Library for a Zywiec and then we walked to Corpus Christi where a big party was going on in the social hall. We had Zywiecs hidden in our coats. Here is a picture of the bowling alley at Corpus Christi. Howard used to go bowling here when he bowled with the Traveling Pepsi League. 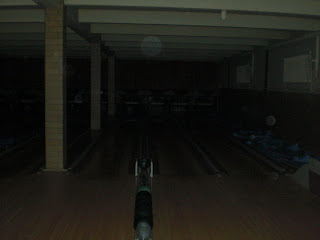 At Corpus Christi we finished our Zywiecs and got new ones and introduced ourselves to the new priest there and right then I ran into Father Secondo from St. Anthony's. Ha, ha! He must think I do nothing but talk to priests! Father Secondo said: "I always know where my parishioners are."

From Corpus Christi we caught the shuttle bus to St. Stanislaus. The shuttle bus was great fun. When you got on everybody screamed at you and high-fived you. I took a picture of this guy getting on at the R&L Lounge. 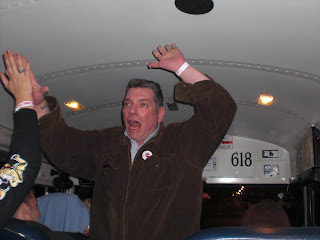 The bus booed when we approached any other destination aside from St. Stan's. Everyone was beating on the seats and chanting "St. Stan's! St. Stan's!" We were also chanting the bus driver's name: "Josie! Josie!"

Before we got to St. Stan's Michelle saw where her car was parked and she needed to get out to put her takeout food from Corpus Christi in the trunk. So Josie stopped the bus and we got out. Everyone booed at us. Then we put the food in the trunk and got back on. A shout went up from the bus: "They got back on!" That made our reputation.

There was this wild frat guy we had seen at Corpus Christi with lipstick marks all over his face and a black wig and a red hat. We had been laughing at him and now I was sitting next to him on the bus, how about that? He was leading all the cheers on the bus and there I was sitting next to him. I wonder if Michelle managed to get a picture of me sitting with this frat guy. I will have to ask.

I snapped this picture of St. Stan's. 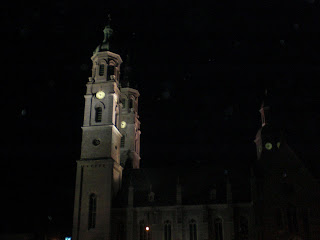 They had a deafening band playing at St. Stan's and there were towers and parades of beer cans. Here is one parade of beer cans I admired. 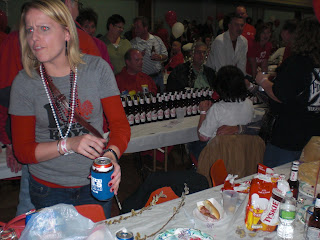 A shout went up when the band blasted into a Johann Strauss polka. Polka-ing is fun! That is one thing I have learned from Dyngus Day.

Then it was back to the Adam Mickiewicz Library which was by now a total mob scene. At the door of the Mickiewicz Library there was an Irish cop who was seeing departing revelers down the stairs. These Dyngus-ers would be stumbling down the steps and the cop would place a fatherly hand on their shoulders. "Straight home, now," he would say. "Straight home." I loved that!

We ran into two city councilmen and also my friend Michael Zahawicz, I do not know if I am spelling it right, who played the organ Sunday at the Mass I went to at Our Lady Help of Christians. He was downing shots of Sobieski at the bar which, I would be downing shots too, if I had to play a Latin Mass. That is challenging!

I introduced Michael to my friend Michelle and this is funny, she pointed out that all night, I had been introducing her to people I knew through the Latin Mass. Who would have thought that going to the Latin Mass would be such a happening thing? But it is! We also were honored to speak with Buck Quigley from the Steam Donkeys, the classic Buffalo band. And two representatives of Sobieski Vodka who gave me a Sobieski medal to wear.

When we finally left I do not know what time it was. The Irish cop saw us out.

Wow! What an awesome day!