Disaster on the kitchen counter 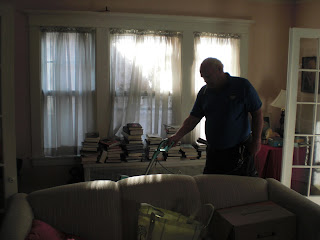 Larry was over yesterday cleaning the house. Remember Larry? He is Howard's friend whom I pay to come and clean the house every week. Otherwise the house would be hopeless.

Above is a picture of Larry vacuuming. He was in the zone and did not even notice my taking it. Larry does an excellent job and I thank God for him. However.

There is one thing about Larry though and that is that he destroys things. Things happen when he is here.

He wrecked the kitchen garbage can so the pedal no longer works that opens the lid. Then after a few more weeks the lid fell off.

He managed to hurt the highboy up in the bedroom so it no longer stands firm. Something happened to one of the legs. That is a word I love, highboy.

Once I talked with him about the peeling wallpaper in the upstairs bathroom. Larry's solution was to take down all the wallpaper. Now there is just plaster! It is like the second floor of the Statler.

You almost have to admire Larry because whatever he does, it will be something you do not expect. You think you have a handle on him and maybe you can predict the disaster and guard against it. For instance one thing he does is, if he finds some veggies from the farmers' market that you forgot in a bag on the kitchen counter, he will take that bag and sling it over some obscure doorknob somewhere, on a door you never open. So you forget about it until you smell something.

Ugh! That has happened several times and now I am wise to it. So yesterday when I came home, the first thing I did was look for this string bag of potatoes. My brother George had brokered this something like 50-pound bag of potatoes at the Clinton Bailey Market and he had taken maybe a third of them, and my mother had taken a few pounds, and my share was now at my house, in this mesh bag.

As I expected the bag was no longer in the kitchen. Where was it? For once I knew enough to look. I looked here. I looked there. Finally I found it slung from a hook on the inside of the back utility closet.

But Larry got the last laugh. This is what I mean about him. He is endlessly virtuosic and inventive, like Leonard Pennario, when it comes to devising new ways to confound you.

Here is what happened.

I keep two Crock Pots on the kitchen counter. Yesterday a pork roast was cooking in one of them. The other was empty and turned off and I do what Larry suggested, use it as a kind of bread box. So there was a bag of popcorn kernels in there, a bag I just got from the Niagara County Farmers Market. And a bag of dried beans. And some whole wheat pita bread.

What Larry did was beautiful and genius. As I said, like Pennario.

He simply turned the Crock Pot on Warm.

This morning something smelled funny and Howard figured out what it was. The plastic of the popcorn bag and the bean bag had melted. Hot popcorn kernels had spilled out and mingled with the hot white beans.

It is what it is, as the saying goes. That is Larry.

I wonder what next Tuesday will bring!
Posted by Mary Kunz Goldman on September 29, 2010