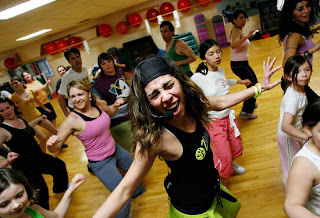 There was all this stressful stuff for me to deal with today so after work I went dancing in the gym. Zumba has come to take the place of that first after-work glass of wine.

Do not worry -- after that there is still the second and the third glass of wine.
But meanwhile I eat and drink less because I am in the gym dancing.

I even listen to Zumba music in the car sometimes because I practice the steps in my head. At such times I think, Leonard Pennario would freak. And I am kind of ashamed of myself. But it is so much fun!

And it is so silly. You can not listen to "She's hot, she's blazin'" and not crack up.

And we are all shimmying up to the front of the room and then you go into this kick, kick thing.You kick one leg out and pump your arms and the one or two guys in the class chime in and go "Uh! Uh!"

Once I started laughing so hard I had to stop dancing.

I told Howard about it and Howard said, "That sounds obscene!"

That is Buffalo style! Only the true Buffalo saying is "All's I know..." The Zumba class in the downtown gym which is where I went today, that is different from the Zumba classes in the suburbs. Downtown with this one teacher, Renee, you get a sort of hip-hop Zumba. That is why when I go out to the suburban gyms I have all the hot moves. Renee teaches you to get out there and shake it!

I have said it before and I will say it again: All I know is I've lost 10 pounds.

Big news today, I got a 'phone call from someone I have been wanting to talk to for the Pennario book, someone I have been waiting to hear from forever. I am so excited about that. I could not call her from work so I sent a quick email saying I would call her in the next couple days, as soon as I found five minutes when I was not going nuts. Well, I did not put it that way. But I did not want her to think I would not call her.

That is the greatest, when something like that happens!

It is almost as great as losing 10 pounds!
Posted by Mary Kunz Goldman on September 30, 2010