The attack of Mr. Clean 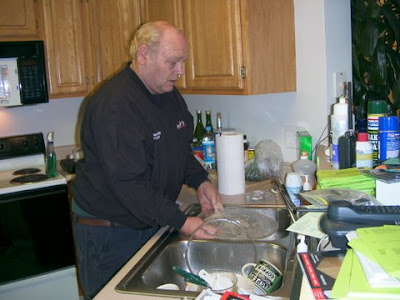 Larry Solomon came over yesterday to help clean the house and that has been a big relief. Remember Larry Solomon? It has been too long since he was in my life.

Ha, ha! That link! I am laughing about how Howard said that Larry Solomon is like the locomotive that stays in the freight yard, pushing around the other trains. About how he is like this robot and if you do not come along and reboot him he just vacuums forever into eternity.

That is a picture of Larry Solomon up above. He is a breed apart!

Yesterday when I opened the door and Larry was there I laughed out loud. It is just that he was standing there with his vacuum cleaner. He brings his own vacuum from home because mine is not good enough. He was just standing there on the step looking uncompromising with this vacuum cleaner next to him and I had to laugh. I could not help it!

Larry pushed past me into the house and lit a cigarette and right away he swung into action. The first thing he did was help me carry Leonard Pennario's records upstairs so they would be out of the way as Operation Clean Sweep went forward. That took a couple of trips because it is not as if I am writing about some slouch who never made any records. There are a lot of Pennario records and we had to get them all out of harm's way.

A minute later Larry was vacuuming. I mean, he was vacuuming within five minutes after arriving at the house.

Howard did not want me to have Larry come over because of that time he broke the kitchen garbage can, and the other time he stripped the wallpaper off the upstairs bathroom without asking anyone.

But I say little things like this are a small price to pay for having carpets that feel fluffy and good and clean under your feet.

Which they do now! And Howard agrees with me. Lucky thing, too. Because Larry Solomon is coming back next week.

There just comes a time you have to run up the red flag, you know?
Posted by Mary Kunz Goldman on October 02, 2009