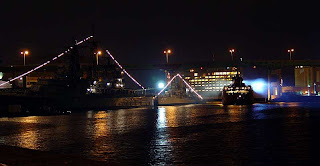 Yesterday I scored my first byline on the business page! My story is about the freighters on the Great Lakes.

It is no secret on this Web log that I am fascinated by the freighters that steam into the Buffalo River outside my office window.

And the Herbert C. Jackson? That is a stunning picture of it up above at night in Buffalo, cribbed from the Web site www.boatnerd.com.

Anyway I asked the business editor if I could write a story about these freighters and he said yes. With which, my immortal masterpiece, "Tough Times for Great Lakes Shipping."

I did not exactly see it as such a bad-news story but this is the business page and they do not pull their punches when it comes to headlines.

It is funny for me to write a story that is not about music because all of a sudden I am off my home turf. When I am writing about Leonard Pennario I think nothing of picking up the phone and calling some of the world's greatest musicians, and believe me, I know what I am talking about. But researching freighters I feel out to sea. Hahahaha! Not bad for before my second cup of coffee.

This story was an adventure. One shipping spokesman I spoke with, Glenn Nekvasal of the Lake Carriers Association, wound up being a huge fan of Gustav Mahler and had just finished reading the big multi-volume biography by Henri Louis de la Grange. So we wound up talking about Mahler. Ha, ha! Finally I had to say, "OK, about the Great Lakes..."

There was one time I actually lost it and started laughing.

That was when I was talking to the director of the Port of Buffalo. I had to call him back to check on this paragraph I was writing about what sort of stuff was shipped through Buffalo. And I had everything all tangled up. He had to go over and over it with me! I was trying to say it back to him, as in: "OK, the coal comes in from British Columbia by rail to Buffalo, and ..."

"And then to Hamilton.."

Finally I just started laughing. But I did manage to pound out these paragraphs:

Coal goes by train from British Columbia to Thunder Bay, Ont., and a freighter carries it to Buffalo, where it is blended with coal from West Virginia and reloaded onto other ships to go to U.S. Steel Canada plants in Hamilton and Nanticoke.

You would not believe the work that went into that paragraph!

Next to that, my book on a great pianist is a walk in the park.
Posted by Mary Kunz Goldman on September 13, 2010

A shipping spokesman is a Mahler fan. Well, given that this and next year are big anniversaries, Mahleriana will dominate. I wonder how many volumes of the de la Grange bio he's shipped?