The 3 People You Meet in Buffalo My mother went to the podiatrist yesterday and later on we had a conversation about what he said about Buffalo. The podiatrist is from Kentucky.

He said what we in Buffalo have long known, that in no other city do people talk to strangers the way we do. You cannot just walk up to someone in New York City and start talking, you know? Whereas you can in Buffalo.

After that conversation with my mom I started thinking about that. I realized that during my day, just that day, without thinking about it, I had talked to at least three strangers. It is fun to play the game of tallying up the strangers you talked to. More than just "hi," too. If you say just "hi" to someone that does not count! 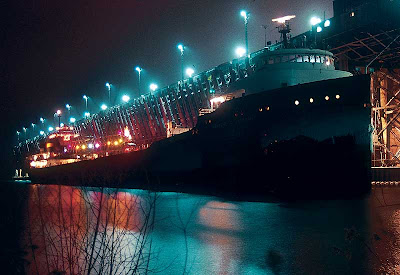 ... was the biggest ship he had seen. So there was that conversation.

Then I went to the tooth surgeon so he could check his work on my mouth and on the way in there was this older guy behind me. So I held the door for him. And when he got inside we had a conversation about the building and which floors our doctors' offices were on. His doctor was J.P. Johnson. Just like James P. Johnson! I mentioned that to him but I do not think he knew who James P. Johnson was.

Oh! I was on my way to my mom's and I stopped at Jubilee Foods at Harlem and Kensington. And I parked far away, who knows why. I get out of my car and go walking toward the supermarket.

And a big Buffalo guy yells at me, "Why'd you park so far away?"

I said: "I don't know. I was wondering the same thing."

Then we went back and forth saying this and that and laughing.

That is life in greater Buffalo! Sometimes I wonder if I would have fallen into this Leonard Pennario thing so easily in another town. We met in Buffalo and in Buffalo there are such few formalities. And Pennario was from here so he understood.

It is not the same in other towns! In Toronto if you hold the door for someone the person does not start talking to you about the weather. He might not even thank you! In New York if you talk to a stranger in an elevator the stranger looks at you funny.

How do you learn to deal with life?
Posted by Mary Kunz Goldman on September 18, 2009

Computer time is rare now with this house under reconstruction and there was not even any power for most of yesterday! But...

What part of KY was the good doctor from? I was just there for a vacation to my hometown (Middlesboro) which is very small and when we all went out to eat, shop or even visit the 'Cumberland Gap National Historical Park' where our old homeplace was located, it was like being at a family reunion!

Agreed, it is not like that in this stinking 'Tidewater VA' area to that extent but it is pretty easy going. Oh well...

Today is my birthday and I cannot be worried. :)

Why do you think so many people can't get anywhere in life? Simple: they haven't lived. And, you can't live if you're too sheltered.