Out on the town 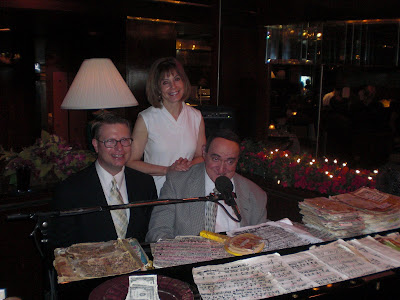 JoAnn Falletta is the conductor of the Buffalo Philharmonic Orchestra and lastnight we went out with our husbands. We went to see Jackie Jocko. That is JoAnn in the picture above with Howard and Jocko.

Jocko gets a kick out of JoAnn. He was reminiscing with her later that night and he said, "The first time I heard they had put a girl up there as conductor ..."

JoAnn was laughing and laughing. That is how cool she is.

I am thinking writing that how funny it is that here I am the, ahem, music critic, and there is JoAnn as the conductor, and I do believe this is the first time in history this has happened, in any city. Normally I am not prone to feminist observations like this but it did enter my mind.

A few weeks ago when I was talking to Leonard Pennario's record producer she admitted that she was pretty much the only woman in a man's business. Then she asked me, "How is it with you?" We were laughing about that.

I had a lot of fun lastnight. Actually I think I had too much fun because JoAnn let me talk about Leonard Pennario way too much. She is probably waking up today telling her husband, there are two words I never want to hear again and they are Leonard and Pennario.

Because zut alors, I do talk.

Particularly with a glass of wine in my hand!

It is a miracle I have any friends!

Jocko had tons of fun with JoAnn. Right away he asked her if she was Sicilian. Then he got straight which sign she is and which sign her husband is. "Oh, you are good together!" he said.

He asked JoAnn what time of day she was born. She said early morning, around 1 a.m. Next thing you know he will draw up her chart. If you become Jocko's friend he sometimes draws up your chart. He did that for me once!

Then Jocko filled JoAnn in on all the losers I had gone out with before I married Howard, and how he could tell that none of them was any good.

We also hashed over embarrassing incidents I have had at the Hyatt including the time I inadvertently met the flutist Emmanuel Pahud.

Such experiences I have had at the Hyatt! We closed the place lastnight.

They were turning out the lights when we left!
Posted by Mary Kunz Goldman on July 11, 2009

Glad you had fun. As long as there were no flutists there...