A toast to a legend 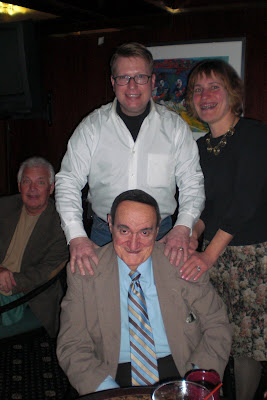 We went to the Hyatt lastnight to celebrate the immortal lounge pianist Jackie Jocko's birthday. Jocko turned 80! The above picture shows Howard and me with Jocko. Wow, my braces! I just cannot handle looking at pictures of myself these days. If I had known I was going to sacrifice my looks for two whole years I might have thought twice about getting them. Well, there is no going back.

Besides which, when my book on Leonard Pennario is done and I go on my book tour, I will look like a supermodel. That is one benefit.

Mark Goldman was at the party lastnight too. Note to out-of-towners: Mark Goldman is an important person around here because he single-handedly brought about the resurgence of Chippewa Street. When I was in high school Chippewa Street was a red-light district. At Sacred Heart, the all-girls school I went to, your friends would draw pictures in your yearbook of you on Chippewa Street, to give a prediction of your future. I have several pictures my friends drew in my yearbooks of me wearing a short skirt and high heels and there would be a street sign saying "Chippewa Street."

And you know what, that predictions came true! Because shortly thereafter, Mark Goldman opened the Calumet Arts Cafe on Chippewa Street and that led the way to it becoming a party district. So yes, there I was, in my short skirt and high heels! But it was not the same thing. Admittedly the street is not what Mark Goldman imagined, which was a street filled with interesting arts and music. It is just a college-partying street. But still, an improvement. 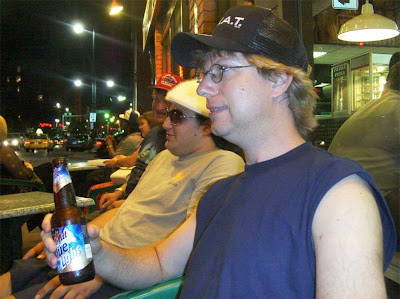 Like Chippewa Street, Howard has changed his look somewhat. Here are Howard and Mark Goldman lastnight at Jocko's birthday party. They look like brothers, with their glasses. 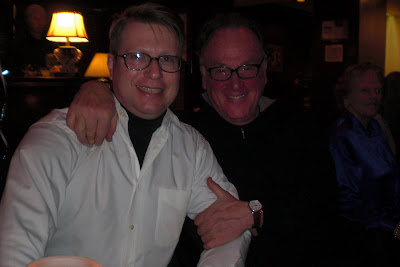 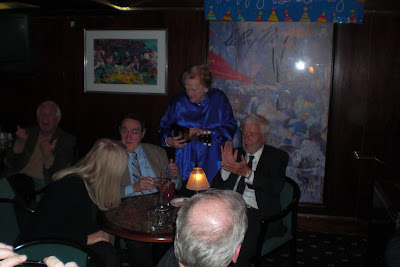 Here I am enjoying the company of Dick and Decoda. Decoda is at left and Dick is at center. 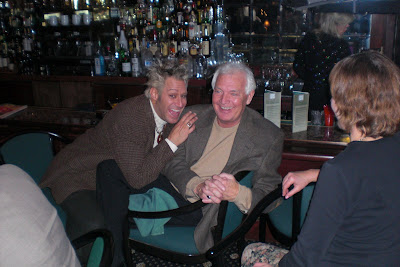 Ha, ha! That reminds me of something. When we were leaving we are all putting on our coats which takes a while these days. I have a hat and boots and a scarf that you pull down over your head. Every time I dress to go outside I look like one of the Knights Templar.

And while I'm getting into all these layers, I keep feeling something brushing against my rear. What in the world? I started sort of looking over my shoulder but I didn't see anything. It kept going and finally I turned around fast and I found what it was. It was Decoda, in this outrageous long fur coat, dusting me with this hilarious feather duster from the Hyatt coat closet! I laughed about that all the way home.

I am easily amused!

But, as we say in Buffalo, whatever gets you through the winter.
Posted by Mary Kunz Goldman on January 22, 2009

You always were a pushover for a feather duster..