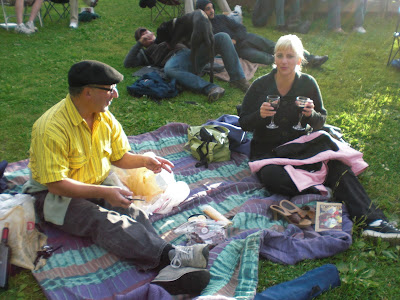 Lastnight in honor of Taste of Buffalo we did Taste of Big Blue. We dined al fresco on the front lawn with everyone staring at us! I am trying to post pictures of that but my computer is acting up and will not permit it. So I am posting pictures of Shakespeare in the Park instead. I saw "The Tempest"!

Above please find my friends Gary and Michelle picnicking on Shakespeare Hill. I am in the middle but you cannot see me. I am invisible! All you can see are my sandals and my purse.

In the background you can see this big overgrown puppy which, I laugh whenever I think of him. His name was Schatze. That is German for "treasure" and I talked German with the dog when I was introduced.

Schatze was all over the place. He could not be kept under control. Finally they took him for a walk and he came back with this big stick and he was on his back flailing around gnawing this stick and everyone was laughing at him. After that they had to take him away for good.

In contrast there was this German shepherd on another blanket who just sat there alertly looking as if he were watching the play. Once when it got sad he started whining! We all started laughing but the laughter was a little nervous.

You start wondering if the dog really did understand what was going on.

What if he did?

I took this picture which looks like a Copley painting. Scoot over Ansel Adams! 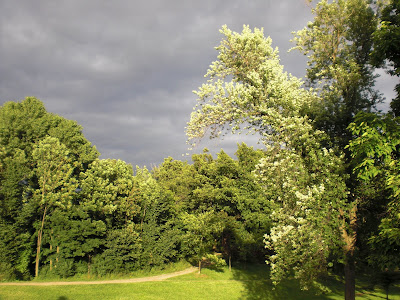 Howard mocks out that picture because he says it is missing a subject. But I say it is high art. The lighting was so unusual. Here is another picture I took. It is of our fellow Shakespeareans. 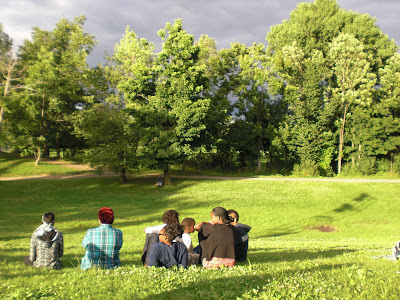 To be frank I got a little lost during the performance. There was so much to do and look at. Going in to Shakespeare in the Park I hardly ever know the synopsis or anything but usually it kind of comes into focus, magically, after about 15 minutes. Your brain adjusts to the Elizabethan language and you are drawn in.

This time around I never did adjust! I felt ashamed because Leonard Pennario was this big Shakespearean and he never would have gotten lost the way I did.

In this picture you can see the stage that, zut alors, I stared at for the most part uncomprehendingly. 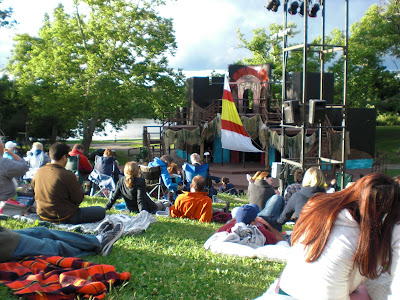 My obtuseness was nobody's fault. I am such stuff as dreams are made of, and my little life is rounded in a sleep.

That German shepherd was smarter than I was!
Posted by Mary Kunz Goldman on July 12, 2009

This computer must be acting up as well because I see (1) a double post of the blog entry and (2) a non-active 'Leonard Pennario' script which is normally a link.

But, I do like that picture. It looks cool!

Double post on mine as well, although I didn't try the link...yet...I will...really!

Sorry, but that picture looks like the eighth hole at Brookfield. Does this guy Ansel Adams play golf?

I like the high art picture the best, it looks serene with "no subject" in it. I would have loved to have seen the dog listening to the play, that had to be great!!

Hey David, the dog IS in the picture. It is the black lab behind Gary and me!

The frontlit greenery against the stormy sky looks nice but Ansel says he'd prefer it shot in b&w.

Zut alors! I am sorry for the technical difficulties. The site was screwing up yesterday! It would not let me post pictures and then it published me double.

Larry, I will fix the Pennario link straightaway!

Ohhh... b/w would have been awesome as well!