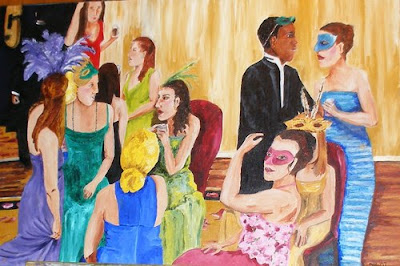 Yesterday I wrote about the Boulevard Mall and someone named Paladino left a comment. And I am wondering if Paladino is my friend Steven. I used to have this friend Steven in San Diego and he has disappeared. My emails go unanswered and I have lost touch with him.

I know Steven's last name and it is not Paladino. But this Paladino's comment -- which he left on the post about Babik and my mom -- mentioned Angola and I thought Steven's family was from out that way. And he talked about San Diego too.

Paladino, are you Steven?

Isn't this crazy? The Internet. We are all losing our minds.

The anonymity on the Internet can turn your life into Mozart's "The Marriage of Figaro." It is like that final scene at night in the garden where everyone is wearing everyone else's clothes and nobody knows who anybody is.

I was just writing in my music Web log about this duet in that scene I love.

Here is the scene with Renee Fleming and a translation!

Then there is the ending where everyone finally figures out who everyone else is and the Count Almaviva has to beg his wife's pardon. It is piggish listening to watch that scene by itself because it just might be the most glorious moment in all music. But here it is anyway and I am a pig, I just watched the whole thing.

That is what my life is like now, "The Marriage of Figaro"! Which reminds me, the other day when I was writing on my, ahem, Music Critic Web log about operas that made me cry, I heard from an anonymous "Marriage of Figaro" fan.

"'Figaro' fan, why are you anonymous?" quoth I. "Stand up and be counted!"

And it turned out yesterday it was my friend Panos! Panos is a very handsome Greek physician who lives on the West Coast and goes to operas so it should not have surprised me that it is he. But it did!

These days you do not know.

Remember the mysterious pianist Mr. Idaho? He was one of Leonard Pennario's friends and I have spoken with him for the book. Once I called Mr. Idaho and a woman answered his phone and she was someone who comments on this Web log. She is Mr. Idaho's girlfriend! And I had no idea. Here is a picture of them together. 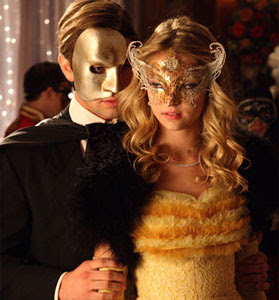 There is this reality TV show Howard likes to watch late at night where everyone goes by goofy names. There was a mother-daughter team named New York and Sister Patterson. I used to laugh at that. No more!

I have friends on Twitter I know only by Piano Geek and La Valkyrie and Kuhlau. Most of these people post their real names on their profiles but it gets so you can not keep them all straight.

So I will not even try.

Hmmm. I am looking and looking for a nice picture of a masked ball to illustrate my musings. And here is what I am finding: It is difficult to find any picture on the Internet of a masked ball that is not kinky, trashy or Tarot-card creepy.

Well, luckily we have no such problem in the music department. Admittedly we do not yet have up on YouTube a recording of Pennario playing Schumann's "Carnaval." That is too bad because Pennario's "Carnaval" is magnificent.

But there is always Pennario playing "La Valse" by Ravel. That is the piece he was the first pianist to play and no other pianist even attempted it for something like 20 years.

I am listening to it now. It is stunning.

And appropriate!
Posted by Mary Kunz Goldman on May 23, 2009

Email ThisBlogThis!Share to TwitterShare to FacebookShare to Pinterest
Labels: Mozart

Mary, a while back, I posted to YT: Verdi: Un Ballo in Maschera/Leibowitz/Radio Symphony Orchestra of Paris/Paris Philharmonic Chorus (1950s reel tape) 1/13

If you Google "Un Ballo in Maschera", you can find many pictures.

Mary, I forgot to note that you need to click on "Images" in Google when you search. Bet you already knew that though.