My mother and Babik 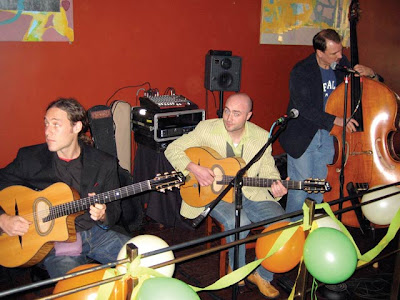 Last night I went over to see my mom and when I got there she was in the middle of telling my brother George the story of our going to see Babik, above, last week. Look, there is a poem starting.

I went to see Babik
Last week
But eeeeek!

The eeeeek was because the fiddler Geoff Perry was AWOL.

Note to out-of-towners: Babik is a gypsy jazz band that looms large in Buffalo. How large you can tell from their touring vehicle. Here is a picture of it. 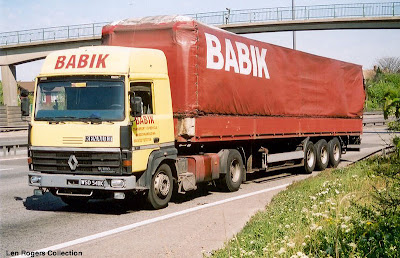 My mother is Babik's No. 1 fan and knows the musicians personally. The concert we went to was Friday at Denton, Cottier and Daniels, which is the world's oldest Steinway dealer, which is the store where Leonard Pennario began taking piano lessons. Well, that was when it was downtown. Now it is out in Amherst and that is where I was with my mother because she had wanted to go.

But zut alors! As the musicians were setting up, she was getting more agitated by the second.

"I don't see Geoff Perry," she was fretting.

Which is a big deal because Perry and the guitarist, whose name is Stu, re-create the sound of Django Reinhardt and Stephane Grappelli. Babik is named for Babik Reinhardt... 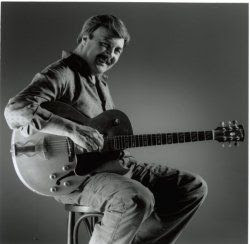 ... the son of Django. I will tell you this, if a time machine were ever invented, I would be zipping back to see Pennario circa 1958... 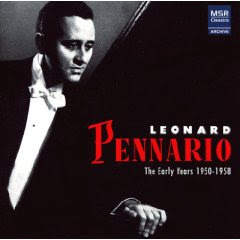 ...but my mother would be blowing past me to go and hear Django Reinhardt and Stephane Grappelli and the Quintet of the Hot Club of France. She is a die-hard fan!

So, not good, that Geoff Perry is not there. Not good! I am looking up at the stage as the musicians do that endless sound check that musicians do. And I am getting worried too.

Finally I went over to my friend Michelle who is vice president at Denton, Cottier. And I asked her about the situation. I was hoping against hope she would tell me Geoff Perry was in the men's room and he would soon come out.

No such luck! "Geoff is in Florida," she told me.

Well, I had known that. He moved there. But I was hoping he was coming back for this gig because when I had called him on his cell phone some weeks ago he had told me he would be coming back for occasional Babik gigs.

But now he is not here. And I have a bitter mother on my hands. And I am supposed to be the bitter one! Mary is Hebrew for "bitter." It did not matter that Dr. Jazz was filling in for Geoff Perry. That was no consolation. Dr. Jazz plays saxophone and that is a different thing entirely.

All I am hearing is: "I would not have come if I had known Geoff Perry was not going to be here."

Even though Dr. Jazz was great and sang "The Sheik of Araby" which is not a song you hear often these days.

So that was my experience with Babik last week. Eeeeek! And now my brother George was hearing the whole bitter rundown.

My mother will probably be talking about it for the rest of her life.

Why are mothers like that?
Posted by Mary Kunz Goldman on May 21, 2009

Email ThisBlogThis!Share to TwitterShare to FacebookShare to Pinterest
Labels: Babik

Oh my goodness, Mom. Gotta hate it when that happens!

There is only one thing worse than a closed shopping mall. That is one which is open that you WISH were closed. The last time I was in Main Place mall, I felt that way. It seemed little more than a food court - this would have been in Jan 2007 - and I remember it from my childhood in the 60's so you can imagine my shock. Still it is probably good that it is available for the quick noon hour lunch. But it seems a bit like using a 747 (or maybe, a 707) to fly to Ft.Erie. Anyway...but cause I am a Western New Yorker stuck in Southern Cal, I know a little something about Malls. Oh boy do I. One of our neighbor families in Angola left in 1959 to move to the LA area to start building sub-divisions and malls. It was going big out here then. According to this website:
http://history.sandiego.edu/gen/soc/shoppingcenter.html
You will see part-way down the page they state that the 1947 Broadway-Crenshaw Center in south LA is the oldest shopping mall. It is a legend around here. But I have not been there myself. In fact, in CA a lot of what they call malls here we in WNY would call a PLAZA - like SouthGate or the old SouthShore Plaza. No real need in SoCal to completely enclose a mall with a roof. But is a Mall just a Plaza by another name (with a roof and doors)? I dunno. Of course, there are some VERY old fully enclosed multi-level shopping buildings in Milan, Vienna, and Budapest. Only these cities can hold a candle to the archictectural treasures of Buffalo -- which of course, the Broadway Mall is not. And there is a similar question in Providence, Rhode Island, which claims to be the oldest Mall in America -- but as you can tell it was not the same architect as Broadway Mall...
http://www.gcpvd.org/2008/12/01/oldest-indoor-shopping-mall-in-america-closed/
Buffalonians are not the only ones covetous of the distinction that they have the oldest mall.
Western New Yorkers could solve this problem by just putting up a plaque declaring it to be the oldest in its category. Who is going to doubt it?

I was stage managing a recital by Nigel Kennedy in Troy during the early '80s, and we got on the subject of Stephane Grapelli ("Steps", according to Nigel, who was a great fan). I asked him to play me a few "Steps" riffs, and he was kind enough to oblige me. Didn't, however, go so far as to detach the horsehair from his bow and wrap it around the ("Cathedral" Stradivarius) fiddle so he could play jazz chords, but I got the point. Fun times.

Larry, thanks for the sympathy! And Ward, I love the story about "Steps,' which is how I am going to refer to Grappelli from now on, and Nigel Kennedy. I met Steps once, so there is my name dropping. But he was really old. My mom dragged me backstage to say hello to him. It's always about my mom!