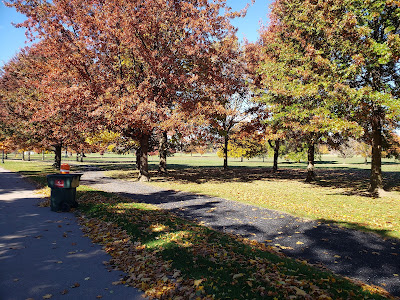 We are in Indian Summer, as we used to call it when I was little. Above is one of many pictures I shot in Delaware Park. The best part is the tote! That is my signature. That is how you tell the photo is by me.

It is in the 70s and sunny and the living is easy.

How did the name "Indian Summer" come to be? Can you still call it that? I looked it up on Wikipedia, as I am wont to do. I am happy I am not the first person to wonder about it. Wikipedia is the first to tell you if what you are saying is, ahem, incorrect. Yet in this case it does not. Here is what I read:

"Although the exact origins of the term are uncertain,[6] it was perhaps so-called because it was first noted in regions inhabited by Native Americans, or because the natives first described it to Europeans,[7] or it had been based on the warm and hazy conditions in autumn when Native Americans hunted.[6] John James Audubon wrote about "The Indian Summer that extraordinary Phenomenon of North America" in his journal on November 20, 1820. He mentions the "constant Smoky atmosphere" and how the smoke irritates his eyes. Audubon suspects that the condition of the air was caused by "Indians, firing the Prairies of the West." Audubon also mentions in many other places in his writings the reliance Native Americans had on fire. At no point does Audubon relate an Indian Summer to warm temperatures during the cold seasons."

I am not sure what this is all adding up to, but it seems to be all good.

"Indian Summer" was the title of a jazz song that Frank Sinatra sang.

What a great record! I am listening to it. Sinatra is singing with the Duke Ellington Orchestra. Right away you can hear that growly restless sound. The Duke is on piano.

This is funny, yesterday we were discussing Duke Cariadoc and today it is Duke Ellington. Tomorrow we will have to introduce yet another Duke, I am not sure yet who.

I am listening to this song. That is the great Johnny Hodges on saxophone! I read in the comments that Sinatra was so impressed by Hodges' solo that at 2:58 in the video, the singer was a half second too late.

That really is a beautiful solo Johnny Hodges plays. It is as if someone is talking to you.

Around the world they also have Indian Summer. However they call it other names.

In Germany and Austria and Switzerland it is "Altweibersommer" -- Wikipedia translates that to "old women's summer" however really it is "old wives' summer." Other Europeans call it "old wives' summer" in their own languages. That includes the Czech, the Polish, and the Ukrainians.

I love that in many countries they name Indian Summer after saints whose feast days fall at this time of year. In Portugal, Spain, and France, it is named for St. Teresa of Avila. It is St. Teresa's Summer. In Bosnia and Serbia it is St. Michael's Summer. Wales also salutes St. Michael by calling it haf bach Mihangel. I am not sure how that parses out.

The Dutch and Italians associate it with St. Martin. Swedes call it St. Bridget's Summer.

English folklore reveals another term that also surfaces in Shakespeare. This one is really nice.

For now, back to Indian Summer. I guess we can choose our own name for it.

I go with All-Hallown Summer.