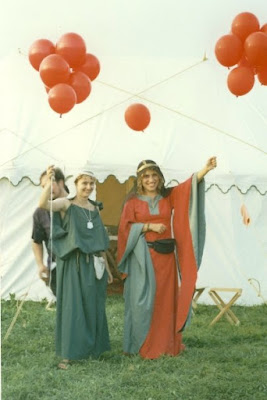 The other day Howard was watching a video featuring Milton Friedman, the great economist. And I did what I always do whenever Milton Friedman's name comes up, which is to boast that I know his son.

"His son was in that medieval group I was in," I said. "His son is Duke Cariadoc."

It is pronounced, for everyone's informatiion, Car-EYE-o-doc. I do not exactly know him. He would not be able to pick me out of a lineup. Cariadoc was my rival in the Society for Creative Anachronism. That is to say, we were on opposite sides. He was king twice of the Middle Kingdom. I was queen twice of the East Kingdom. We had it out every year at the Pennsic War in Pennsylvania.

Once, I think, I was in Duke Cariadoc's encampment. However as I said I did not know him well. He had the reputation of being kind of a stuffed shirt, meaning he was scholarly and followed medieval nuts and bolts to the letter. How many metaphors did I mix there? Forgive me, I am still on my first cup of coffee.

Back in the day I also looked askance at Countess Mara. She was also a stuffed shirt. Once at Pennsic, Countess Mara was walking along the path in her coronet and someone asked to take her picture. Countess Mara looked down her nose and said, "As you wish."

Oh, we roasted her for that, my friends and I did.

However she was right!

If you are a countess and someone asks to take your picture, you sigh and say, "As you wish." Oh wait, I think she said, "If you must." Even better.

Anyway, I did not understand any of this. I was 19 and a not very mature 19 at that. That is me in the SCA at the top of this post, by the way, with my partner in crime Jacquetta. I was about 21 by then. My name was Kunegunda.

Back to the other day, when the name "Duke Cariadoc" was spoken in our home. I went on to look up Milton Friedman on Wikipedia. Howard and I are always doing that. And Milton Friedman's son was mentioned! His name is David D. Friedman. He had his own Wikipedia entry because he is some kind of scholar, no big surprise there.

Now this is what floored me. The Wikipedia entry went on to describe David Friedman's involvement with the SCA, at great length and in great detail. His name, the site accurately reported, was Duke Cariadoc of the Bow. I remembered that correctly.

And it explained all about the East Kingdom and the Middle Kingdom and it said that Cariadoc had founded the Pennsic War. That last bit I had not known however it makes sense.

It is amazing, the publicity Cariadoc has! I was puzzling over it the next morning as I was engaged in the very medieval task of untangling my hair, Then I hit on an explanation.

"His minions must have done this," I said.

That is a shocking moment when you think you have grown up and you suddenly realize you are the same person you were.

All of a sudden I was back in time!

I was also king twice of the East Kingdom.