The greatest Scrooge of all 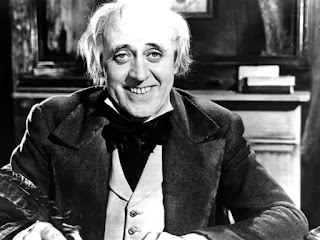 Last night being the Second Day of Christmas, Howard and I watched the old 1951 version of "Scrooge," the great version starring the one, the only, the great Alastair Sim.

That is Sim pictured above! Needless to say that is after Scrooge has come to his senses. You must spell "Alastair" with an "a" and not an "i"! Everybody misspells it. It is not Alistair. It is Alastair.

Seeing anything in the company of Howard is fun because Howard sees things with new eyes. It was not Howard's idea to see this however, I should point that out. I suggested it and he said yes, perhaps because the night before, I had submitted myself to watching a long and druggie documentary on Chet Baker. I love jazz but this documentary, after a while it just began leeching life out of you, I am sorry.

With which, Howard said yes when I suggested "Scrooge." And it was a rare thing in my life to watch the entire movie. I got tears in my eyes several times. Watching by myself I can cry steadily through the whole thing. But with Howard I tried to blink it back.

Admit it though: How do you not cry when Scrooge sees the Cratchett family grieving over Tiny Tim? "I saw the place where he will rest," Bob Cratchitt says. "It was so peaceful. And I felt he was holding my hand --" I am getting tears in my eyes typing this!!

Then that beautiful scene at the end, when Scrooge goes to his nephew's house. Here is where you see Alastair Sim in all his magnificence. He arrives at the door, unannounced. The maid takes his coat. It's fun to observe how people lived back in the Victorian age. He gets ready to open the door to the dining room. Inside you can hear someone singing "Barbara Allen."

He pauses. He looks back at the maid. This is what gets me. The way he hesitates like that. The maid nods. Scrooge opens the door. The singer sees him. "Barbara Allen" stops.

I do not want to give away what happens in case you have not seen it. And if you have seen it, you do not need my explanation. But is there anything sweeter than forgiveness? It reminds me of the end of "The Marriage of Figaro" when the Count gets down on his knees and asks the Countess' forgiveness. When he asks you can here his sincerity, and when the Countess forgives him, you just burst into tears, there is no way around it.

Sweet forgiveness! When I was out of the house and in my first apartment, we had that Bonnie Raitt album and we played it all the time.

Where was I? Scrooge.

All day I have had on my brain the polka that the band plays as he dances with his nephew's wife. I am like Leonard Pennario in that movie music sticks with me. I remember it. The score to this movie is by Richard Addinsell, who wrote the "Warsaw Concerto." This is the best version of "A Christmas Carol." The cavernous Victorian interiors. The lack of sugar coating when it comes to the ghosts. Sometimes it is terrifying. 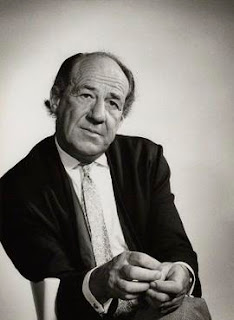 There is just stellar talent all the way. It is not as if I am learned enough to recognize people. However, just one example is Marley's ghost. Howard and I were laughing that it must be some vaudevilllian. It is not. I just looked it up and it is Sir Michael Murray Hordern, CBE, one of the great Shakespearean actors of his age. He was especially famous for his portrayal of King Lear. He would play Lear at Stratford-Upon-Avon.

No wonder Marley was so chilling! Sir Michael did not know how to play it any other way. That is he at left. No mistaking him, I will say that.

Who else was in this immortal film? Roddy Hughes, a Welsh actor, was Fezziwig. Artists of the Victorian era all had fun drawing Fezziwig and Mr. Hughes fit the part. There is a very sad scene where he sees Scrooge and Marley taking down his sign and moving into his building. Roddy Hughes' real name was Rhodri. The Welsh, you cannot beat them.

Speaking of the Welsh, I see that Bob Cratchitt was played by Mervyn Johns. Seeing the name in the credits I wondered: Was he related to Glynis Johns, who appeared in "Mary Poppins" singing "Sister Suffragette"? The answer is yes!! He was her father. Her mother was the concert pianist Alys Steele. I will have to look her up. After Alys died, Mervyn Johns remarried, to the actress Diana Churchill. I know I have heard of her. I just cannot think exactly where.

Here I go, down the rabbit hole.

All roads lead to "Scrooge"!

Oh I love this! Yes, this is a wonderful movie, and the best film adaptation of A Christmas Carol. I love it all, but especially his redemption, Christmas morning, his joy at being alive and having another chance to get it right. "I don't know anything, I never did know anything..." complete with claps and foot stomping. "You!Boy!" ❤❤

Libby, we always agree on important matters like this! That is what I love about the movie too! Having another chance to get it right... and the way he scares the cleaning lady, too funny!
What gets me is, "Can you forgive a pig-headed old fool..."
Thank you again for keeping up with my ramblings!!