The Mysterious River Creature Down By the Docks 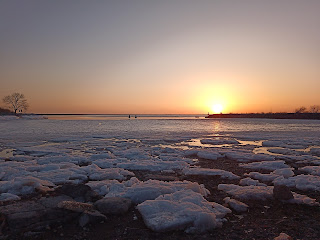 I hated to see the sun set today. That is it up above! I took that picture at Wilkeson Pointe.

I hated to see the sun set because the day was just so lovely.

Today I returned again to the Maumee. That is the ship wintering on the Outer Harbor by the Cheerios plant.

... and all of a sudden the weeds that covered the water, I saw them moving. Next thing I knew there was this big animal undulating this way and that. It had this big rear and it would splash and dive beneath the surface and come back up but never to the extent that I could see it clearly.

I did know that it was not a snake, I will tell you that right now.

It was also not a fish. That is what I thought it was at first.

Also, it seemed benign. It seemed happy, going this way and that, some fat happy animal. 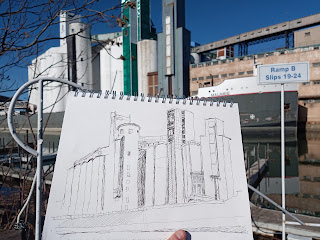 I was on the docks. I used to draw on the shore but I have graduated to drawing right on the water. 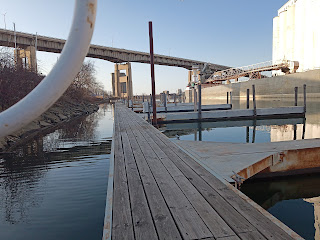 And I turned around and ... there it was! The creature!

It was maybe two yards from me. It was a little bigger than a cat. I went to grab my camera and take a picture but it moved fast and splashed back into the water with a big belly flop.

Then I saw it swimming around. It had these little ears, I do believe.

After conferring later at Wilkeson Pointe with my friend Ryan I do believe it might have been a beaver. That was the closest we came to figuring this out.

Here is a picture of a beaver from the National History Museum. 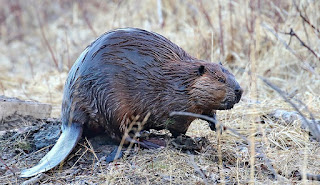 This is what the animal looked like although to be honest I did not get a good look at its tail. Which, that would be vital to positive identification.

Here is a video of beavers swimming that looks like what I saw.

They are playing Bach in that video. How about that? Today is the birthday of the great Johann Sebastian Bach! Surely this was all meant to be.

Ryan is going to go with me to the docks, with luck to get a look at this animal in person.

This is funny, no one wants to go with me anywhere to be with me when I am drawing. But bring in some animal, and everyone is into it. They want to see this creature!