The Maumee and me 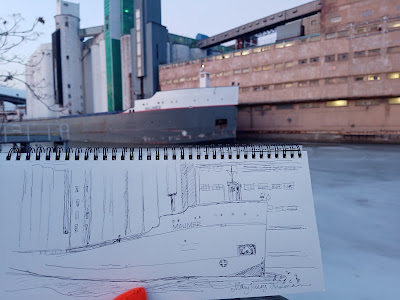 The freighter called the Maumee is docked down by the Cheerios plant. I believe it is spending the winter there.

It is parked next to the Cheerios plant and it is surrounded by ice! The ice is melting a bit but it is still very much there and ducks and ducklings are waddling around on it.

I noticed the Maumee a few weeks ago because I am always on the lookout for these Great Lakes Freighters and I love to monitor their comings and goings. Looking on Boatnerd, a site I love, I was excited to read that the Maumee was built in 1929. Alas, it turned out that was a different Maumee. That Maumee was scrapped not long ago. This one dates to 1953.

Here is the correct Maumee on Boatnerd. Ships typically go through a number of names and this ship was originally called the Reserve. I love the scholarship on Boatnerd! "The Reserve sailed on her maiden voyage from the shipyard April 22, 1953 upbound in ballast to Superior, WI for a 18,571 ton (18,869 mt) load of iron ore." Boatnerd is amazing. Every writeup tells you everything the freighter in question hauled, all the names it had, why it was named what it was, where it went, all the collisions it got into, which tugboats hauled it to safety, where it was repaired, everything.

The Reserve had also made a voyage in 1952 so, you figure that one out, I cannot.

This evening down at the Outer Harbor I found a little walkway across the river that gave me a decent view of one end of the Maumee anyway. Looking on Boatnerd I see that the photographer there, she did not do much better. It is hard to get a view of the whole ship because they are so massive.

However I was fortunate to get where I did. I had not realized there was this area where there are platforms going out over the water. I went out on one walkway and took this picture looking back where I had come from. 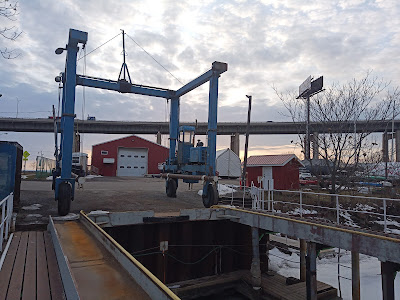 Then I found this adorable set of steps! 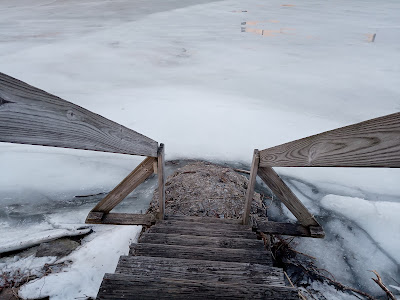 The steps headed down to the ice and signs warned you that the water could be electric. I am not making this up! Needless to say I stayed prudently up near the top.

Conditions were not ideal, but I had a wonderful time sketching the Maumee, not worrying about it, just having fun and feeling so lucky to be where I was. The sun came out and shadows appeared on the grain elevators. The air smelled wonderful, like spring. A crewman appeared on the deck of the Maumee and walked along its length. The ship's lights began to flicker on. I was thrilled. I am in love with lake freighters. I do not know what it is! Everything about them, I love.

I would like to work on this drawing. I think I could do something good. Today I had not planned on doing this sketch and all I had with me was my long and narrow sketchbook, 5 by 12 inches. I would like to use a bigger piece of paper. Another thing, I was thinking maybe that in this case it might be interesting to branch out from pen and ink and try charcoal, or marker, or something, I am not sure. It is just that pen and ink is a kind of delicate medium for this massive freighter.

Well, this ice is not all melting anytime soon so with luck the Maumee will be with us a while.

And now that I know my way around, I will not be a stranger! Me and the Maumee, we are not through yet.