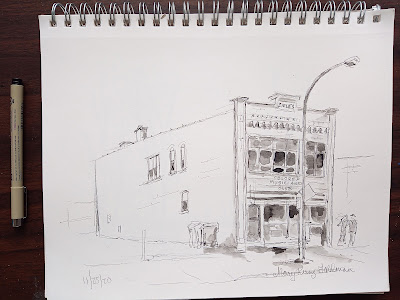 The Colored Musicians Club on Broadway and Michigan holds a special place in my heart. So it was a treat to draw it.

I was working nights next door to the club at a printer called Buffalo Publishing. I would do typesetting and put together wine menus and -- this is how long ago it was -- I would paste up big newspaper ads for AM&As. My sister Katie worked further down the street teaching at St. Ann's. We would joke about working on Broadway! But anyway.

There was this sign in the building next door, a red neon sign in an upstairs window, reading "Musicians."

I said, "We have to find out what this is about." No one I worked with seemed to know. So one day I went over there and tried the door. Here is a closeup of my picture so you can see. That is the door, on the left. It was locked. 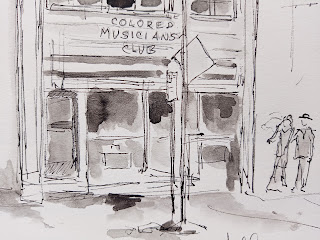 I rang the doorbell. A buzzer sounded and I went in.

There was this long narrow staircase and I went up it. At the top of the staircase was a door and I opened it. And that was how I ended up in the Colored Musicians Club.

That is how everyone ended up there!

That is how we will end up there again once things return to normal and we can live like normal human beings.

My friends at Buffalo Publishing and I all began frequenting the club on our dinner breaks, to the extent that our boss eventually put out a memo addressing the situation. The memo said, "Any employees visiting the CMC should work all through your shift and take your break at the end." I always remember the memo abbreviated it like that. It was just such a pervading thing in the office that everyone went there. We would drink Rum and Cokes and Lupe the bartender would make them strong.

Here is a picture of the picture in progress. 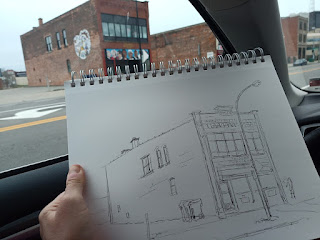 Sketching the CMC I thought back on all that as I drew in the street light, the bare street corner. I had so many adventures at this place over the years.

I love your adventures, Mary!