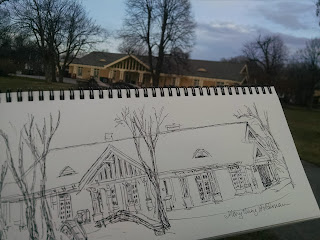 Coronavirus is among us and we are in lockdown. Well, there is nowhere we may go but to the park, which I did today, taking the picture up above, of my quick sketch of the Parkside Lodge.

Not only that but it is necessitating us to wash our hands for an interminable length of time. And my sister Katie came up with the idea that we should memorize poetry and use that time to practice it.

I love memorizing poetry. And it is easier than when I was a kid, far easier. A couple of years ago I memorized Yeats' "The Fiddler of Dooney" and it is still with me. I learned it because I was writing a story about the St. Patrick's Day Parade and there is a float in it that reads "And Dance Like the Waves of the Sea."

I also memorized Edna St. Vincent Millay's poem that goes, "We were very tired, we were very merry, we had gone back and forth all night on the ferry." I forget the name. Isn't that silly, I know the poem, every word of it, I can recite it beautifully at the drop of a dime, but I did not bother to memorize the name. But anyway I know it.

The memorizing of that poem dates to when I had to write a story about staying out in a bar till 4 a.m. That and the St. Patrick's Day parade story were both part of that series I wrote for The Buffalo News called "100 Things Every Western New Yorker Should Do At Least Once." It sounds dumb now but I took that series very seriously. I took the series seriously, get it? I would walk around thinking about the one I was working on. My editor gave me this long list of 100 Things and miraculously I was able to fit them all in, on a weekly basis, in something like 102 weeks. It was tricky because so many were seasonal and I had to bring a photographer. But we made it work!

These 100 Things would percolate in my mind and sometimes I would memorize a poem. That is funny, the Edna St. Vincent Millay poem, whenever I say it to myself, it brings back that time when I did indeed go out -- with my friend Ryan and my friend Lizzie -- and stay out till after 4 a.m. We were very tired, we were very merry! That is the truth.

With which, my sister suggested we memorize poems so we may utilize that time we are spending washing our hands. I have just memorized Edward Lear's "The Owl and the Pussycat."

I already knew half of it so it was not that hard. One thing that makes it easier is that every time I see someone with a ring in his or her nose -- which is often -- I think of the Piggy with the ring at the end of his nose.

Next I will move on to "The Courtship of the Onghi Bonghi Bo."

This lockdown may be long!