Through the Presbyterian looking glass 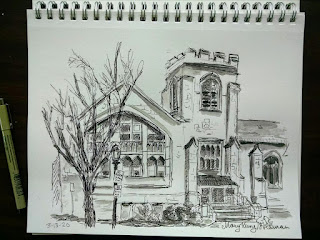 Today I stopped in my day and did a quick sketch of this massive, fortress-like edifice that used to be Central Presbyterian Church. It is in Buffalo's Parkside neighborhood.


It is funny, the things right in your own back yard that you pass a million times and never look at! This was one of them. Since I have been drawing I notice so much more. A few weeks ago I stopped for the first time in my life and noticed this place. I said out loud, "What in the world?"

It is so huge!

What I drew was just a back corner!

When I got home I looked this church up on one of our Buffalo architecture websites. I did not know what the name of it was because it is a school now. I found out the name and I learned that when it was built in 1911, it was the biggest Presbyterian church "east of the Mississippi," and that the architect was one Williams Lansing, who was very distinguished.

Lansing, it turns out, also designed Holy Family Church, where I was baptized. And a whole lot of other buildings, many of them churches, both Catholic and Protestant. He himself was Episcopalian. He was one of the founding members of Buffalo's Canoe Club. He is buried in Forest Lawn near the famous Fargo plot which I pass many times while walking. Listen to me! I am now the clearinghouse for all things Williams Lansing. I am a fan!

Looking up something like this is dangerous because you go down the rabbit hole and can waste hours if you are not careful. I was also fascinated by the history of this church;s erstwhile congregation. There is this one article by James Napora -- fascinating all the way through, but I will just mention for starters the nicknames.

Organized as the Pearl Street Presbyterian Church, they quickly erected a log meeting house on the west side of Pearl Street just north of Genesee Street. Built at a cost of $300, the building contained over 500 seats for a congregation of only thirty-five. It became known as the "ecclesiastical blacksmith shop" as it resembled a large blacksmith shop.

The congregation grew rapidly and within two years, with almost 200 members, they built a new church. Modeled after the Parthenon, it had an oval interior lit by a stained glass skylight. This feature earned it the nickname of "goose egg church."

From the Ecclesiastical Blacksmith Shop to the Goose Egg Church!

And we are not through yet.  A few paragraphs later you read that "between 1849 and 1851, the congregation now numbering 475, worshiped in the basement church referred to as 'Dr. Lord's Icehouse.' "

Dr. Lord was a person in town. He was not the Lord. Just to clear up any confusion.

What a history! How could anyone do it justice?

When I go back to this place I'd better bring my big drawing board.