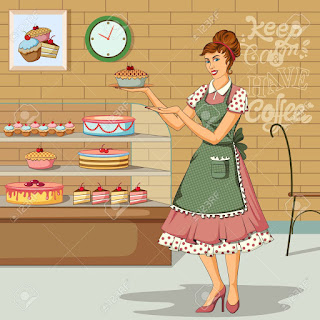 Yikes, almost all I did all day was cook and bake!

My friend Lizzie posted something about baking on Facebook that has stuck with me. It was some joke going around and the punch line was "Procrasti-baking." That is baking when you are supposed to be doing something else. We have all been known to do that!

But whether or not I like baking I have to do it on Saturday because Sunday is the church coffee hour. And that is my ministry. It is my donation. I bake.

The Prince of Wales' motto is "Ich dien." I serve.

I want a German motto too! Mine could be "Ich backe." I bake.

Hmmm. The pianist Wilhelm Backhaus, whose Beethoven I love, his name must mean bakery. Bill Bakery.

Bakery should be my last name!

Today I made blueberry muffins, utilizing my historic Buffalo George Urban muffin tins. And spice muffins, a bigger size because I do not like everything on the buffet looking alike.

I also made banana bread from bananas that my friend Lizzie left with me when she had to fly down to Florida a few days ago. Haha, that was funny. Because Lizzie had had these bananas for weeks and kept talking about them. She was going to make chocolate chip banana bread because our friend Oscar likes that, and she was going to make normal banana bread, and then there was a loaf that she made that did not turn out to meet her extremely high standards, and --

And then, you guessed it. I was taking Lizzie to the airport and what did she toss into my trunk? The bananas. I just burst out laughing. After all that!

So, banana bread. What else? I also made a pumpkin cranberry bread with pumpkin I had frozen a couple of months ago. It is autumn's last gasp before we head into the -- hurrah! -- Easter season. And I made Whiskey Squash Cake in my Bundt pan. That sounds rather decadent for Lent but though it is delicious -- I have made it many times, with different twists -- it is really not that boozy.

I also made soup. The kitchen was alive with both Crock Pots and the bread machine all in play. And in between I took care of some Leonard Pennario correspondence with Capitol Records. But that also is a story for another day.

So I guess the entire day was not baking after all. I did get some other stuff done.

It was not all Procrast-Baking!