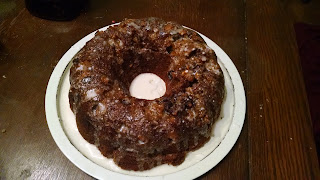 Last week I made my second Bundt cake for church. The first, a week before that, was a big breakthrough.

I know, Bundt cakes are not supposed to be a huge challenge. However, years ago, I had attempted a Bundt cake, and it had stuck to the pan. I did something with the cake, I made a bread pudding. But I never forgot the outrage.

And I never attempted another Bundt cake. Until just recently. This is the beauty of participating in our church coffee hour, at St. Anthony of Padua Church. I like to make a game out of it and try to do new things.

I made a Whiskey Squash Cake out of a Reader's Digest cookbook I have. It was a recipe I had had my eye on for some time. Whiskey, got to love it. I almost subbed rum because Rum Squash Cake sounds good too, and I am sure it would work. But I had to go with Whiskey.

I baked the cake in my Kugelhopf pan which previously I had used only for yeast breads. Hmmm. Consulting Wikipedia just now I see that Kugelhopf -- well, they say Gugelhopf -- is the original Bundt pan. Nordicware copyrighted the name Bundt in the 1950s and '60s.

Whatever my pan is called, let me tell you, I oiled and floured that pan half to death.

That cake came out with its hands up!

I sugared it up and took this picture. 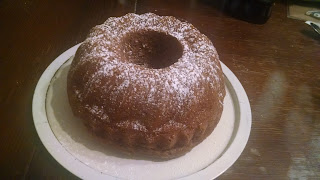 So, success!!! Drunk on my success I made the cake pictured at the top of this post. It is a Banana Cream Cake. Oh, excuse me, Banana Creme. It has sour cream in it, is the reason for the name.

I used my other Bundt pan for that. Remember that pan? You can make cakes in it from all over the world.

I took the cake to coffee hour. Gone in 60 seconds!!

I never had a bite!

But I can assume it was good. And so forward I will go as the Leonard Pennario of Bundt cake bakers.

Fire up that oven!