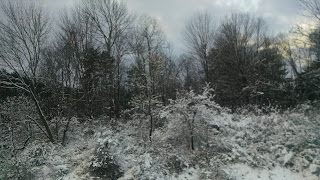 That picture looks wild but it is just something I snapped out the window on our way to see my sister Katie last night for Christmas dinner.

They live in East Aurora, aka the Snow Belt. They got snow. We did not.

It was exotic to me and so I took another picture. 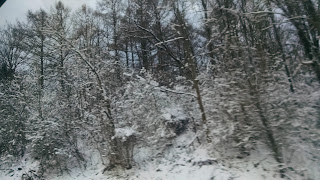 At my sister's house disaster hit. I could not stop eating!

I started with split pea soup my brother George brought in a Crock Pot. He set the Crock Pot down on the floor near the Christmas tree and you had to go help yourself there.

Then we sat down at table and the food just kept arriving!

My sister's husband, David, is a hunter, and there was venison. Venison like fine steak, pink in the middle and sliced really thin and enjoyed, at least in my case, with horseradish.

There were mushrooms that David foraged. And Katie made some kind of dish involving what I believed to be roasted pears and onions -- delicious.

Speaking of mouthfuls we also had a huge bowl of mashed potatoes, yummy with the mushrooms. A beautiful big salad with pomegranate and blackberry vinaigrette. I cannot remember what else. The thing is, dishes just kept showing up, one after another.

After dessert, which I will not even get into, I was so stuffed I could not move!

I asked my sister if I could help wash the dishes just because I wanted to get on my feet and move. She said no and then brought some cranberry liqueur a friend had made. And we had that.

There was also a great Crock Pot full of Celestial Seasonings Bengal Spice, our favorite. That was the only thing I consumed that had no calories.

Today all I wanted to do was be on my feet. So it being Boxing Day I boxed up tons of things I did not like any more and that were getting under foot and I took them to Amvets. I managed to get out of Amvets without buying anything to take home to replace the stuff I had delivered, which is what I usually do. I parked way across the parking lot so I would have a hike.

Later I thought: Uh, Mary, you could just go to the gym, you know?

It is the Second Day of Christmas.