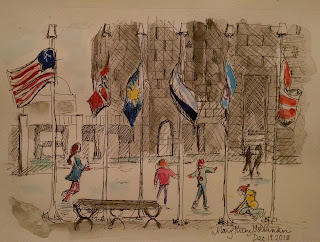 Today my friend Meghan and I went downtown to sketch and wound up bombing around. Which I loved. When was the last time I bombed around? I could not even remember.

We went to Fountain Plaza and sketched the skaters. That is my masterful rendition up above!  It was something different for me and I had a lot of fun with it.

Then we turned around and sketched the old Buffalo Savings Bank across the street.

And after that we went wandering down Main Street and there was a hot dog man and so we ate hot dogs.

Then we found ourselves in Roosevelt Plaza and we drew the Hiker. That is a statue put up to commemorate the veterans of the Spanish-American War. Here is what I loved. The whole time we were sketching, nobody stopped and wanted to see our work. However, everyone looked at us and then they looked up at the Hiker.

I loved that people were looking at the statue. I loved that they noticed it. Normally people walk by statues and never notice them.

After that Meghan was a little cold so we stopped in a hip coffee shop but it was small and crowded so we went to the Lafayette Hotel and got coffee at the Public. We got our coffee to go and, coffee in hand, aimlessly wandered the hotel, all three floors, admiring how beautiful it was.

Then at long last we emerged and meandered down to the Electric Tower. We wondered if we could go in and sure enough, we could. There is a pretty coffee shop in there so next time we get coffee that will be where we go.

To our delight the corridors of the Electric Tower were lined with historic photos of the place. We learned what it used to do, which was sell electric appliances, lamps and refrigerators and such. We must have pored over those pictures for an hour, discussing the eras they portrayed, and what our lives would have been like had we lived then, and whether or not we would have been able to do our hair like the women in the pictures, and how people used to dress, and which buildings were there then that are not there now, and why was it necessary to take them down.

After the skaters and the Buffalo Savings Bank and the Hiker we never did end up doing another drawing. However I did feel we accomplished something. Later I realized I had not taken a single picture. I had snapped nothing with my camera! I had only what was in my sketchbook. And that preserved the day, you know? Looking at my sketch of the skaters I remember it all, how the flags were flying in the wind, how one skater fell on her bottom, what the day was like.

Leonard Pennario told me that he never took pictures, that what he had in his head was better.

With me it is what is in the sketchbook.