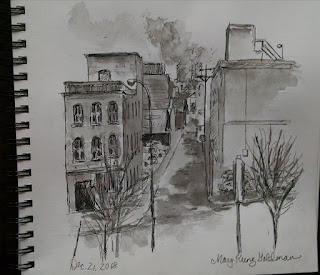 You know how Monet went back again and again to his lily ponds? And Georgia O'Keeffe returned to her New Mexico landscapes?

I keep returning to this one Buffalo alley.

It is downtown and for some reason whenever I draw it, it is always getting dark. The other night there was smoke coming from a chimney and I sketched it and signed it with a flourish, as you can see up above. Your signature is the thing about art that is the most fun! See, this is something other artists will not tell you.

This was the sketch before I put in the shadows. 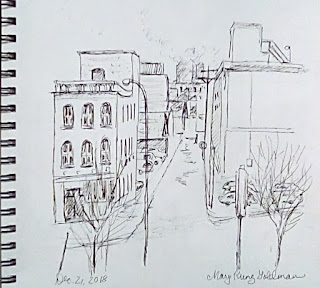 I kind of like it that way too! But I thought about what I loved about that alley and it was the smokiness of the scene.

Earlier when I sketched this alley it was from a different angle. What I loved about it that time, looking at it from that slightly different direction, was the building in the middle, on that garage building, and the snow on the roof. 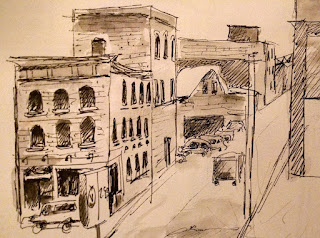 That building is just so cool!! I want to go back and try it from that angle again. In the upper versions you can only see the edge of it.

When darkness descended I drew the alley again. From this angle I had a good glimpse of the gas station sign in the foreground. I loved drawing that sign. In the top picture you just see the edge of it. 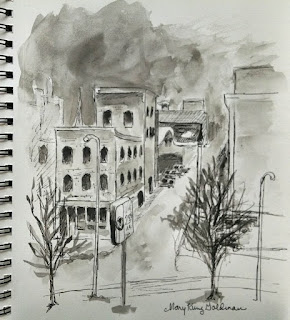 And I did not even show you the mistakes! I love drawing that alley, is all I can say. By the way right to the left of the alley -- it would be off the paper -- is the famous "Rainy Night" corner building that Charles Burchfield painted so magnificently in 1930. Here is Burchfield's famous painting. 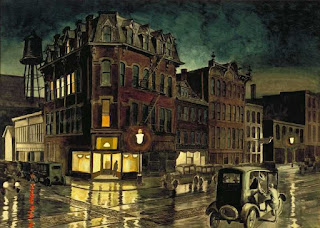 He returned to that building several times. I just read that and I loved it because it made me think of me and the alley. I started reading up on Burchfield recently because some people who saw my drawings said my style reminded them of his. Which, could you please tell me that again?

Anyway. That is the greatest compliment ever, and I am not going to say I deserve it. But I am enjoying learning about Burchfield because I am seeing that many of the things that appealed to him are the same things that appeal to me. And I think we share some of the same ways of thinking and looking at things.

This is cool: If you look at Burchfield's corner house, the house that stars in his picture, and count over three houses to the right, according to my calculations that is the building that stars in my alley picture. The two buildings in the middle are gone now, replaced by a pawnshop and I forget what else, probably a parking lot. But that building on the right, the little one with the four rows of windows -- that has to be the building on the left in my sketch. And sure enough, in the Burchfield painting, to the right of that building, you can see my alley.

I wonder if Burchfield ever painted it? If he never got around to it, that's too bad. But he can rest easy.

I've got it covered!