The ghostliest statue at Forest Lawn 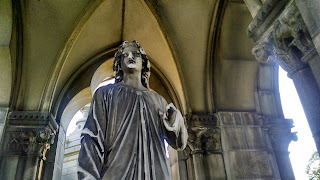 I do not want to say spooky. It would not be fair to the family whose memorial includes the statue. The family happens to be the Pratt family. The memorial is one of the highlights of Forest Lawn. It is, so scholars say, a prime example of esteemed Victorian funeral art.

But the finish has worn away from the central figure, resulting in that vision above. Here, another view. 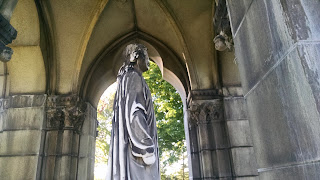 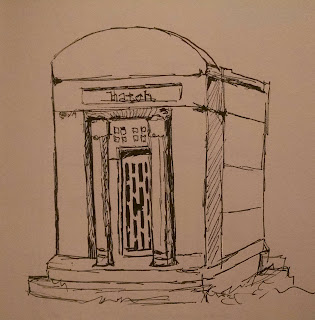 ... was easier to draw, I will tell you that right now.

The Pratt memorial which you may read about here dates to the 19th century. It is not as old as you think. The first burial took place in 1872.

There are gargoyles all over the place at the Pratt memorial too. I have to say I do not quite get the gargoyle thing, when it comes to what is supposed to be your serene final resting place. Who could rest easy with this ... 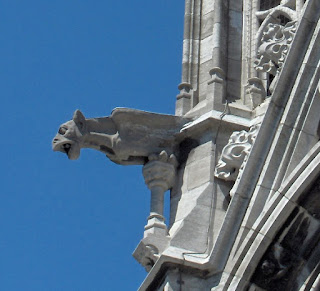 (The gargoyles at the Pratt monument looked a lot like that one.)

Yet Samuel Fletcher Pratt sleeps peacefully as far as anyone can tell. I have not seen him, not on any of my explorations of that cemetery.

I will have to go back just to make sure.

That, and to have another try at drawing that statue!