Delaware Park in the dark 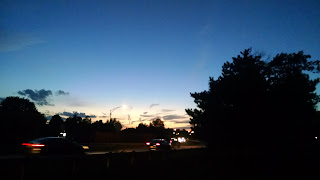 We have a little heat wave going here in October in Buffalo. It reminds me of other Octobers that were very warm. It happens!

But after tonight the temps are supposed to fall into, well, fall. Big time.

With which, tonight I took the Huffy Harvard Limited on what might be its last spin this year -- although, who knows. I pedaled aimlessly around North Buffalo a bit and then, when it was getting dark, I swung twice around the Ring Road of Delaware Park.

It is a kick to go into Delaware Park in the last warm days. Last night I went walking around and even after it was dark, I mean really dark, the park was still full of people. It was as if it were 3 p.m. Kids were zooming past on scooters. Families were camped on the lawn. The basketball courts and the exercise area continued to play host to nonstop action. Speed bicyclists were racing around the park with their helmets and strobe lights. Those bicyclists are kind of annoying, you know? But still.

Fun to see everyone there! I took that picture above, by the way, when the sun was going down. I hate to see that evening sun go down!

Tonight was the second night and I did not stick around quite as long, but the place was jumping as it was last night. There is a kind of desperation in the air now because here it is 80 degrees but tomorrow, so they say anyway, will be different. Motorists were extra obnoxious. Radios were loud. Motorcycles were roaring around by the million. It was enough to make you think ....