My encounter with Aretha Franklin 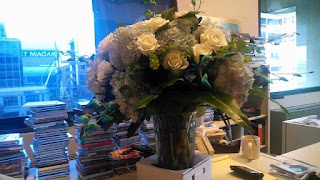 I was sad to hear a few days ago of the passing of Aretha Franklin. She died so young. And it gets me on a personal level, because of the time my path crossed hers.

It was a unique encounter! The saga began with a phone interview I did for The Buffalo News.

This particular call was an accident. Our pop music critic, Jeff Miers, happened to be on vacation when Aretha's publicist called offering the interview. We did not want to say no to an interview with Aretha Franklin, seeing that she lived in Buffalo as a girl. So I stepped up to the plate. I put myself through a quick crash course on her career -- I was an expert on Leonard Pennario, not on Aretha Franklin -- and then the diva and I spoke.

Here is the interview I did. Reading back on the interview I smiled remembering how when I mentioned I played the piano, and began asking her about her own playing, she seemed to relax and brighten. Pianists love to talk to other pianists!

But the real fun began afterwards.

It was right as I was telling her goodbye -- isn't it funny how that is when people come out with stuff? Aretha began talking about the friends she had as a little girl in Buffalo.

She wondered if I could help her get in touch with this family. And so I did. First I put together a story, a kind of shout-out to them. Blassingame, the name was.

Subsequently I was able to get a hold of Wayne Blassingame on Facebook. We had a bunch of friends in common and so I was able to message him. Aretha had remembered him as the baby of the family. She had been sort of sweet on his older brother, Gordon.

Aretha came to town and as you can see in The News' photos, was delighted that she was able to meet Wayne, who still lives in Buffalo and, may I add, is still my Facebook friend. Meanwhile, I got to talk with Gordon Blassingame.

We ran that story under the subtle title, "Aretha Franklin's Childhood Crush Tells All." I believe I wrote that headline.

The whole experience really touched me. You could tell Aretha was taking stock of her life. You could tell she was looking back wondering what things might have been like if her life had been different. This boy Gordon Blassingame -- well, he was now, like her, in his 70s -- she had tried to reconnect with him a couple of times in his single days, after their paths separated. Once, when she showed up looking for him in a limo, he was out of town.

He struck me as a salt-of-the-earth guy, the kind of man every girl would be lucky to marry. He had been in the military, joining the Marines. Then he had settled down to a job in public transit, and retired with what I imagine must be a good pension. He had been married to his wife for 41 years and hoped to top his parents' record of 50 years of marriage. He chuckled that he and his wife joked about Aretha from time to time, affectionately.

No wonder Aretha had seen something in him. A celebrity's life can be lonely and I bet you wish for that kind of normalcy, for a good faithful man to stand between you and the world.

My Aretha Franklin story did not end when her concert did.

A few days later, this gigantic bouquet of flowers arrived at work. That is the bouquet in the picture at the top! Howard found it. The flowers were from Aretha, with a note thanking me for helping her reconnect with her friends.

I think we did an email back-and-forth after that. I know I wrote her to thank her, and she mentioned to me that when she next came to Buffalo maybe I could give her a tour of The Buffalo News. Which, we all would have loved that. But she did not come back here, at least not that she knew. She did come back from time to time, we heard, to visit her mother's grave in Forest Lawn.

It got so I liked to go to Forest Lawn too! Too bad we never realized we had that in common.

I sort of thought I would get to meet her one day. She had invited me to say hello at Artpark, but I think I had to be at the Philharmonic or someplace. Plus I learned a long time ago not really to listen when artists invite you to meet them backstage. Who needs another stranger backstage, you know? And those situations do not bring out the best in me.

I still cannot actually name one Aretha Franklin song aside from "R-E-S-P-E-C-T." But I began jokingly to think of her as my buddy. My buddy, Aretha. I said a prayer for her when, in the car, I heard she had died. We should all say our prayers for Aretha Franklin, pray that she makes it to heaven. I have a feeling she will.

She was more than the Queen of Soul.

She was a gracious lady.