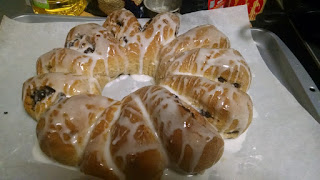 One reason I went for that bike ride yesterday was that I was relaxing after my church coffee hour baking.

It is hard to believe I have been baking for the coffee hour for two years now. Two and a half years! What is really funny is I still get a real kick out of it.

Yesterday my theme was, I was baking out of a cookbook called "Breakfast at Nine, Tea at Four." It is put out by, ahem, the Mainstay Inn in Cape May, New Jersey.

With us it is more like, Mass at Nine, Coffee Hour at Ten Fifteen. But it is all good. I made Orange Kuchen and Blueberry Breakfast Cake, both from that cookbook. They were part of a larger buffet that also included banana bread, corn bread, eggs with sausage and veggies ... 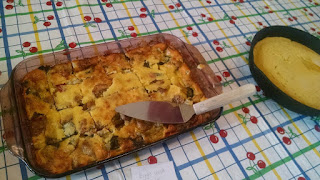 ... and my trademark Jackson Pollack coffee wreath pictured way up above. This week I made a chocolate filling.

Also on the groaning board were Lizzie's brownies and yummy zucchini bread, and watermelon that our friends Bill and Margaret bought. That is life at St. Anthony of Padua's Latin Mass! Every week is like Babette's Feast. Other people bring stuff, too. We do love to eat.

Yesterday to the pleasant surprise of Team Coffee, the turnout was great even though it was a summer day and our Latin Mass Picnic was last week so you would have thought people would have had enough of each other for the time being.

We went through almost all the food!

And my friend Alenka who is from London praised in particular the Orange Kuchen. Alenka does not care for cinnamon and deplores that here in America it is everywhere. And so I had subbed in allspice for cinnamon in the recipe, all on account of her.

I was particularly proud of the eggs because they were a last minute sub for something that, uncharacteristic for me, had not worked out. I threw this dish together and prayed it would bake fast enough to get me to the church on time, as the song goes.

My prayers were answered! I was on time! Well, almost on time. The priest and the altar boys ... 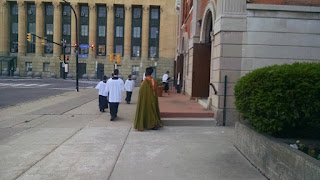 But still. Such fun, you know? Sometimes at Mass it is hard for me to keep my mind on the prayers because I am thinking about the food.

I am not Mary, I find myself thinking on those occasions.