A day of croquet 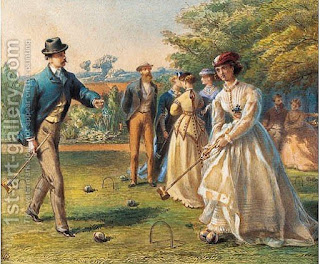 The other night our family had a picnic. My brother Tony brought a croquet set and after dining in the open air, we played croquet. That is us up above, enjoying our sport. My brother Tony is at left.

Fooled you! Actually this is us. 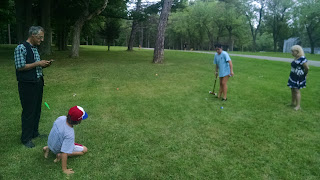 From left to right you are seeing my brother Tony, my nephew Georgie, my niece Barb, and Tony's friend Jacquie. You may wonder at Tony's look of grave concentration! It was his job to instruct us all as to the rules and keep the game moving. Not easy!

If you could not see the wickets in the picture we could not either. But that is part of the challenge of croquet.

We used to play croquet years ago in our family. We went to Emory Park in East Aurora, to the exact same location shown in the picture, and would play croquet as the sun was going down. We would play until it was too dark to see.

Once Tony, who was about 12 then, missed a shot and he threw his mallet into the air in frustration. My dad filmed it on this camera he had and he would play it in when we had Home Movie night. Then he would play it in reverse so you could see the mallet airborne, then returning to Tony's hand. Ha, ha! Tony tells the story hilariously.

Now, I will tell you this, I can understand his frustration.

There is nothing like whacking that ball toward the wicket and it just grazes it and rolls off into an utterly inconvenient direction. The other day that kept happening to me.

I lost that game fair and square!

I put the "croke" in croquet!

But I am looking forward to next time. And there will be a next time. This is the second family picnic we have had and everyone is psyched for another.

I will be working on my game.