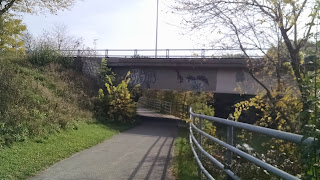 Today I rented one of those Reddy Bikes and took a ride on the funky bike path.

I mean the Scajaquada bike path, that runs parallel to Scajaquada Creek. As Charles Dickens would say, it is the best of times, it is the worst of times. The path gives you great views by the History Museum .... 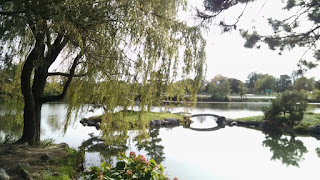 .... and then you get views such as at the top of this post, where you feel alone in the world and surrounded by graffiti and worry you will be beset by highwaymen.

The path takes a turn and you think: Oh, no, it continues? 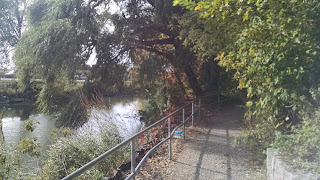 I passed a person pushing a shopping cart. And two kids who, all I could think was, they looked like Halloween goblins. Just up to no good, you know? And a couple who, they were having a tense moment. Just standing in the bike path arguing, making up, you couldn't quite figure out what.

The path spat me out on Niagara Street, as I knew it would. I was hoping to find my way to the Riverwalk but I never did. I made it to Niagara Street and could go this way or that way. The signs, if there were any, were vague. Down one way was a threatening-looking guy loitering under a bridge, so I nixed that. Going the other way, I ran into a family coming out and I asked them where the path went. They said it was a dead end and we were laughing about that.

Now this is the greatest. I made my way to Broderick Park and saw this: 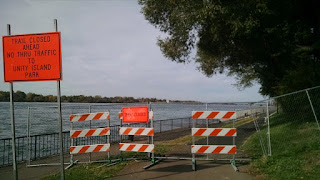 That was what I had been hoping to find, a path right by the water. There it was! And it was closed.

But you know what? I had fun.

It reminded me of being a kid, just bombing around, riding down Niagara Street, looking at things. Eventually I had to tell myself, Mary, you have work to do, you can't just go riding aimlessly around Buffalo forever.

I honestly could have kept at it all day!